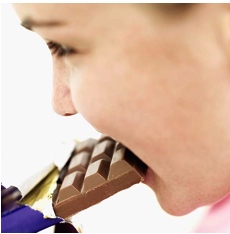 Even during tough economic times, chocolate-lovers refuse to give up their favourite indulgence.

That’s according to a new survey from Mintel, which shows that worldwide chocolate sales continued to grow this year, even in countries not traditionally known for their chocolate consumption.

In China chocolate confectionery sales rose 18 per cent, while it jumped 12 per cent in the Ukraine. Britain saw sales increase 5.9 per cent in 2009, sales in Belgium jumped by 3.2 per cent, and the U.S. market grew by 2.6 per cent. Mintel’s Global New Product Database shows that roughly the same number of new chocolate products were launched in 2009 as in the previous year.

“It’s clear that despite economic trouble this year, the world’s chocolate lovers didn’t deviate from their favorite treat,” noted Marcia Mogelonsky, Mintel’s global food and drink analyst. “Chocolate is a small, affordable indulgence for shoppers who are cutting back on spending elsewhere.”