Vertical farming on the rise 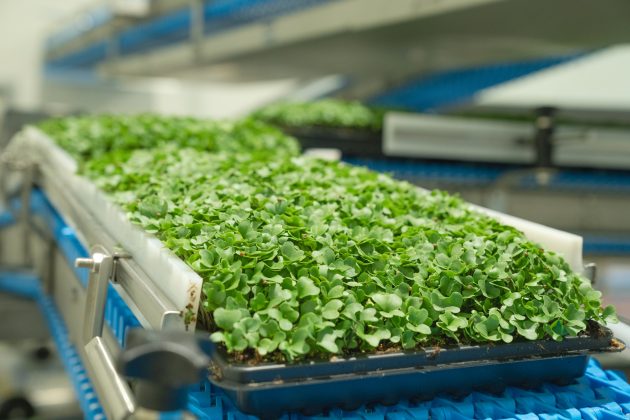 As innovations go, growing baby kale and micro radishes indoors without the use of soil likely wouldn’t be on most people’s top-10 list. However, for Barry Murchie, who leads Canada’s largest commercial vertical farming operation, the proprietary process and cutting-edge technology being used to grow small leafy green produce at his company’s fully automated facility in Guelph, Ont., is the greatest thing since sliced bread.

“We’ve done tremendously well and learned so much about the vertical farming industry,” said Murchie, president and CEO of GoodLeaf Farms, a wholly owned subsidiary of Truro, N.S.-based TruLeaf Sustainable Agriculture. “This is a major pioneering effort.”

Opened in July 2020 with a production capacity of nearly 500,000 kgs, the 4,200- m2 GoodLeaf plant meets what Murchie says is growing demand and interest from national, regional and local food retailers across the Greater Toronto Area.

A long-time senior executive with Canadian agri-food giant McCain, which is the largest shareholder in GoodLeaf, Murchie is now leading his company to new frontiers.

This summer, GoodLeaf will begin building two more plants—one near Montreal and another at a still-unnamed location in Western Canada—as part of a McCain-driven plan to build a national network of vertical farms for year-round production of micro- and baby greens for local markets.

Vertical farming—the notion and practice of rowing crops in stacked, upright layers in buildings, old mines or even shipping containers through the use of specialized LED lighting and soilless farming techniques like hydroponics, aquaponics, aquaculture and aeroponics—is not new.

Driven by a space-age need to survive on distant planets and a humanitarian desire to end hunger, provide food security and reduce the environmental impacts of traditional agriculture, vertical farming has attracted the attention of scientists, food companies and starry-eyed entrepreneurs since the phrase was first coined in the 1990s.

However, the vast majority of early vertical farming operations were scuppered by the harsh realities of high energy costs associated with the technology at the heart of their production systems and low revenues from agriculture commodities driven by the lowest price point.

“They simply couldn’t compete,” said Mark Lefsrud, an associate professor at Montreal’s McGill University and one of Canada’s leading experts in greenhouse technology and urban agriculture. “Even today, it costs a lot more to grow lettuce and other produce in a climate-controlled environment here in Canada than it does to truck it in every day from Florida, California, the southern U.S. and even Mexico, like we do now.”

However, Lefsrud says a perfect storm of conditions has given the vertical farming industry new life in recent years. Those conditions include the development of better and cheaper lighting and hydroponic equipment (the result of R&D in the legal cannabis sector), massive amounts of investment capital (roughly $1.8 billion USD into startups between 2014 and November 2020, according to Financial Times) and increased consumer and government demand for locally grown produce and food security as a result of the pandemic, which disrupted supply chains. 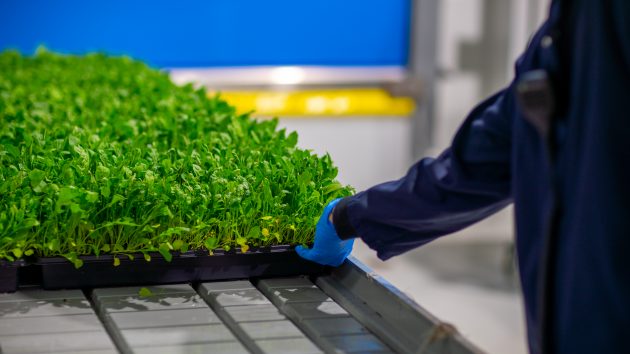 Most of the commercial vertical farms in the country are growing leafy greens.

In Canada, roughly a dozen commercial vertical farms are now in operation or planning to either expand existing operations and/ or open new ones.

According to a March 2020 report from Ontario’s Greenbelt Foundation, half of those farms are operating in Ontario and all of them are growing leafy greens.

One of those businesses, Elevate Farms, formerly known as Intravision Greens, can grow up to 454,000 kgs a year of lettuce, arugula, basil and other leafy greens at its nearly 2,000-m2 flagship plant in Welland.

The company, which also has farming facilities in New Jersey and New Zealand, is currently working on a $15-million deal it signed a year ago with Whitehorse-based North Star Agriculture to develop and build cost-effective vertical farming facilities in the Yukon and other isolated First Nations and northern communities that are dependent on costly imported produce.

Elevate founder and CEO Amin Jadavji, who calls his company one of the most advanced farming solutions in the world in terms of both labour per kilogram and electricity per kilogram of production—two key industry metrics—said the northern facilities will bring more food security and nutrition to “particularly isolated and vulnerable regions of Canada.”

Vertical farms have also popping up outside Canada. In the U.S., which represents roughly one-third of the US$3.1 billion invested worldwide in vertical farms (according to the Ontario Greenbelt Foundation report), a showcase facility called 80 Acres Farms opened to great fanfare in Hamilton, Ohio, in January.

Dubbed a ‘reference design’ for potential partners and governments worldwide, the $30-million, 5,800-m2 facility can produce some 10 million servings of leafy green produce a year close to consumers, cutting transportation time and costs while improving freshness.

In Europe, the first phase of what will soon be that continent’s largest vertical farm went into operation in Copenhagen in December.

Built by Nordic Harvest, a Danish start-up with Taiwanese partners—a consortium that also plans to build the world’s biggest indoor farm in Abu Dhabi—the facility has a production capacity of 200 tons of organic salads and herbs a year, an output that will quintuple when the facility expands in two upcoming phases to 14 floors and 7,000 m2.

Despite the headlines, vertical farming remains a niche sector in the field of ‘controlled environment agriculture’ (also known as ‘indoor plant environment’), which includes greenhouses and hoop houses.

According to various sources, the worldwide vertical farming industry currently accounts for about 30 hectares, an area equivalent to about 50 football fields in size. That pales in comparison to the half-million hectares of greenhouses growing produce and the roughly 50 million hectares of farmland used to grow produce.

Despite all the hopes and hoopla over vertical farming, many indoor agriculture experts say food companies in the sector have a hard to row to hoe before they reach profitability.

“Vertical farming is very sexy and trendy right now, like cannabis was a few years ago,” said Derek Schulze, a former commercial greenhouse grower who now teaches at Ontario’s Niagara College. “It all sounds great, having these fresh finished products at the end of a modern manufacturing process. But it’s all being driven by engineers, not agronomists, and plants are living things, not widgets or potato chips.”

Schulze pointed to a 2019 report on indoor agriculture by the World Wildlife Fund-U.S. It suggests that while vertical farming has exciting potential, it “remains a nascent, disparate industry with several risks that must be addressed before it can achieve scale.”

Challenges range from the acquisition and mastery of the automation and technology required to grow produce in confined spaces to the control of variables like energy costs, climate, plant genetics and systemic external and internal diseases.

The industry is also currently restricted almost exclusively to the production of non-flowering leafy greens due to technological constraints and agricultural retail market realities.

However, proponents of vertical farming believe the industry has a bright future. McGill’s Lefsrud, for example, says innovations under development will allow more types of produce to be grown indoors at more competitive prices.

“We’re never going to grow oranges or kiwis or mangos or other tropical plants here. It just doesn’t make economic or practical sense,” he said. “But I fully expect that vertical farms will soon be growing all types of temperate crops.”

Lefsrud estimates that in 20 years time, 20 per cent of all produce sold in Canada will be grown locally indoors. “There’s talk of going up to 50 per cent, but not in the short term,” he said. “There are even export opportunities for places like Quebec, where energy costs are much lower than Ontario or the U.S.”

For his part, Abraham Gusman, president of UpCulture and Rvest, a Montreal-based collective of farmers that is in the planning stages of a large vertical farm to produce lettuce for the local market, says the potential is limitless.

“It’s extremely exciting to grow food indoors year-round using hydroponic and aeroponic technologies,” said Gusman. “We’re trying to understand Mother Nature and all of the elements that intertwine in this beautiful dance. The demand is there. Consumers are looking for locally grown food products.”