Chocolate is Good for the Heart 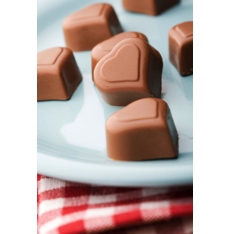 A new study confirms what many chocolate-lovers have long suspected – chocolate is good for the heart.

The nine-year study followed 31,823 Swedish women aged 48 to 83, and looked at the amount of high-quality chocolate they ate as compared to their risk of heart failure. In all cases the chocolate had a high-density cocoa content.

The results, released in the American Heart Association’s Circulation: Heart Failure journal, found that women who ate an average of one to two servings per week had a 32-per-cent lower risk of development heart failure, and those who ate one to three servings per month had a 26-per-cent lower risk. However, women who consumed at least one serving or more of chocolate per day didn’t appear to lower their risk of heart failure.

According to Dr. Murray Mittleman, lead researcher of the study and director of the Cardiovascular Epidemiology Research Unit at Harvard Medical School’s Beth Israel Deaconess Medical Center in Boston, daily chocolate consumption likely offers no heart health benefits due to the additional calories gained by eating chocolate rather than choosing more nutritious foods.

“You can’t ignore that chocolate is a relatively calorie-dense food and large amounts of habitual consumption is going to raise your risks for weight gain,” says Mittleman.

Mittleman notes that the chocolate consumed during the study is also significant. Although 90 per cent of it is milk chocolate, it has a higher cocoa content than much of the dark chocolate sold in North America, with about 30 per cent cocoa solids compared to 15 per cent in the U.S. Serving sizes also come into play – the serving sizes for the study ranged from 19 g for those 62 years and older, to 30 g for those under 61 years old. That compares to an average portion size of 20 g in the U.S.