While it’s been in use for thousands of years, turmeric has recently been skyrocketing in popularity, not only for its flavour but also for its purported medicinal properties 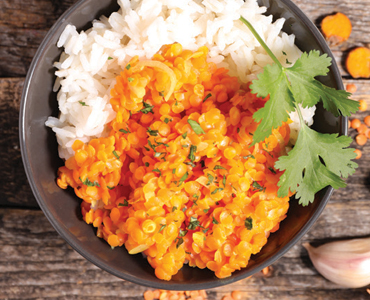 Don Dickson, owner of Vancouver’s South China Seas Trading Co., used to play a lot of baseball. He played regularly until he was 50, and he credits turmeric for his ability to continue playing as he got older. “If it hadn’t been for turmeric capsules, I don’t think I could have done it past the age of 35,” he says. “I was a catcher, and catchers’ knees get wrecked, and taking turmeric every day did give me a fair bit of relief.”

Baseball aside, Dickson knows quite a bit about turmeric, both in terms of its culinary uses and its purported health benefits.

His company – which specializes in herbs and spices – has sold turmeric for years, in fresh and dried forms. But it wasn’t until recently that he’s really been seeing it take off in the mainstream. “Like so many other things that we sell – we sell them for years and no one else has them, and then all of a sudden we start noticing them popping up everywhere,” says Dickson.

Turmeric is a perennial plant from the same family as ginger, native to Southeast Asia. It’s been in use for more than 4,000 years, both as part of traditional Ayurvedic medicine and also as a spice used in Southeast Asian and Asian cooking. “It’s traditionally used in India, Southeast Asia, Indonesia, Malaysia, Vietnam, Thailand – it’s had pretty broad culinary uses throughout that part of the world,” says Dickson.

On the culinary side, turmeric has “a fairly strong flavour,” he says. “We sell it both dry and fresh. The fresh one has a nice gingery light fragrance to it, sort of like an earthy ginger – a very pleasant smell, less pungent than the dried product. It has that flavour that we associate with curries.”

What are its health benefits?

With the rise of “superfoods,” it’s often difficult to figure out which nutritional claims to believe. But in the case of turmeric, there have been numerous serious scientific studies delving into its medicinal benefits.

The active ingredient of turmeric, called curcumin, is a type of polyphenol. Among other things, curcumin has been shown to help prevent depression in mice, and scientists are studying its impact on treating Alzheimer’s disease. Studies on rats from a few years ago showed that turmeric could help prevent and maybe even reverse liver damage, and there are ongoing studies looking into its impact on treating or preventing cancer, particularly colon cancer. It’s also been studied as an anti-inflammatory, a treatment for arthritis, a preventative measure for people at risk of developing diabetes, and more.

How are people eating turmeric?

Google’s 2016 Food Trends Report revealed turmeric to be the “top trending functional food,” with online searches for turmeric growing by a whopping 56 per cent in the short span between November 2015 and January 2016. As turmeric’s popularity soars, recipes using the potent yellow spice abound on the internet. Aside from its common use in traditional curries, many foodie websites suggest using it as an ingredient in frittatas, rice dishes, vegetable mixes, soups, and even as an addition to smoothies. There are a plethora of online articles describing how to brew your own turmeric tea, and we’re also seeing commercial turmeric tea bags on the market from companies such as Numi Organic Tea.

In fact, we’re starting to see a number of innovative consumer products featuring turmeric as an ingredient: the California-based Tu Me Beverage Co. makes turmeric-infused sports beverages, for instance, available in five flavours – coconut water, pomegranate, berries, citrus and mango. And Navitas Naturals, also based in California, offers a packaged product called Turmeric Tamari Superfood+ Almonds, combining the nutritional benefits of both turmeric and almonds in a grab-and-go snack. If turmeric’s popularity continues to skyrocket, we’re sure to see more products like these hitting the grocery store shelves soon.