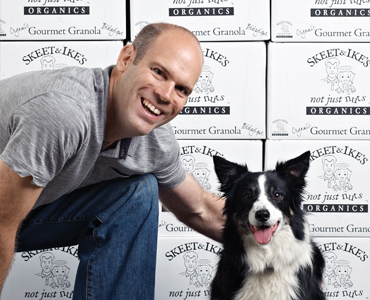 It all started, strangely enough, as an art project back in 1996. “There wasn’t exactly any grand intention to start a business,” says Ian Walker, president of Burnaby, B.C.-based Left Coast Naturals.

which he created a fictional nut butter brand. Thinking maybe this nut butter could sell in real life, Dorland approached Walker with the idea to start a business. Walker, only 24 years old at the time, had a business degree and a family background in business, so he thought he’d give it a shot. “It just sort of happened,” he says. “It wasn’t this big purposeful thing, and really it was a bit of an experiment at the time to see if there was a market for this product.”

Fast forward 20 years, and it’s clear the experiment worked. Today Left Coast Naturals is a thriving business with approximately 50 employees and more than $20 million in annual sales. The original nut butter business grew to include a popular organic snack line under the Hippie Foods brand – which includes various flavours of coconut clusters, coconut chips, gluten-free granola and garden chips (made from veggies), and is available across Canada and in some parts of the U.S. – as well as an organic bulk food business, which includes grains, nuts, snack mixes, seeds, cereals, beans, candies, dried fruits and baking ingredients.

And in 1999, the company added a distribution business. “Why do one business when you can do two?” says Walker, with a laugh. Today Left Coast Naturals distributes between 25 and 30 different organic and natural food brands to more than 500 stores across Western Canada. Walker says they’ve decided to maintain very high standards for the products they will distribute, ensuring that all ingredients are clean and GMO free. This has admittedly meant cutting out some business, according to Walker. “We probably gave up half a million dollars in sales because of our stance on [GMOs],” he says, “but interestingly that’s won us a fair bit of respect with the retailers because they get it. They say, ‘Well these guys have integrity, we can respect what they’re bringing to us.’”

This is something that’s changed noticeably since the 1990s, says Walker. With today’s consumer increasingly placing a premium on sustainability and clean ingredients they can trust, he has definitely seen a difference in the way his company’s commitment to these values are viewed in today’s food marketplace. “Back in the day, people like us we were kind of the weird people that the retailers tolerated because we were nice and brought them products that they could sell. But now, even the most mainstream retailers look to us, and they love what we’re able to do, because we’re able to make them look good,” he says. “They’re not saying, ‘Well, try selling it at those hippie stores for a little while and if it works well, then come back to us,’ like they used to. Now the mainstream grocery stores all want these products right away. In fact, they want to be the first to market with them. And that’s been great.”

What’s your favourite thing about being in the natural food business today?

“The great thing about this business is you get to be in an industry that you feel really good about. To me, that’s when things click: when your personal philosophy aligns with your business philosophy. And that’s really what I enjoy about this industry – that we can have our own principles and values in our business, and be lucky enough that that’s the direction the industry’s going in.”

Do your company’s values make it easier to recruit talent?