New protein options are all about clean ingredients and added healthiness 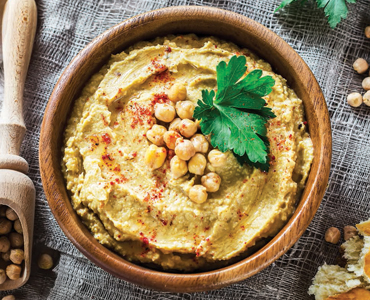 Everyone in food production knows that consumer focus on health consciousness is not likely to diminish anytime soon. Indeed, demand for healthy products continues to grow. “As part of the trend, protein-rich options are seeing tremendous and widespread fanfare across many categories of packaged foods,” notes Beatriz de Llano, research associate at Euromonitor International. De Llano adds that along with cheese, meat products and hummus, yogurt is now an important healthy protein-rich snack, “particularly among the younger generation, including millennials, who often times skip meals.”

Consumers are increasingly wary about the artificial ingredients, she notes, so natural yogurts free of gelatin and synthetic

ingredients are in demand. Yoplait and Loblaws, for example, have removed preservatives within the last two years.

Sales of Icelandic yogurt skyr (pronounced “skeer”) are also strong. Skyr has even more protein than Greek yogurt, with less sugar and no lactose or fat. Shepherd Gourmet Dairy of St. Mary’s, Ont. was the first in Canada to make it, in 2014. Loblaws sells Canadian-made skyr under its President’s Choice brand, now in plain, strawberry, vanilla and Powerfruit varieties.

Healthy and convenient fruit and nut bars are another high-protein snack also registering growth, according to de Llano. She points to KIND bars, for example, which entered the Canadian market three years ago with 12 varieties. The company has since “expanded to 24 different products,” says de Llano, “including cereal bars, fruit/nut-based bars and clusters as of early 2016.”

Biscuits Leclerc in Saint-Augustin-de-Desmaures, Que. recently released Chocomax protein bars to meet the ever-growing demand for quick and healthy protein. Marketing co-ordinator Cristina Ramirez Salazar notes that compared to Special K, Nature Valley, Vector or Fibre 1 protein granola bars, Chocomax bars “are the only ones coated with real chocolate, and have the best ratio of protein/bar content: 10-g protein per bar of 32 g.” The protein comes from nuts and soybeans, and the flavours are Strawberry, Mochaccino and Salted Caramel.

Holy Crap cereals of Gibsons, B.C. continue to be a convenient and clean high-protein breakfast or snack choice. All the company’s cereals are non-GMO, organic, kosher, vegan and free of gluten, lactose, salt and nuts. Chia, buckwheat and hulled hemp provide the complete protein. “Athletes, students, business people, pregnant and nursing women, and those with particular dietary concerns (such as celiacs, diabetics and people undergoing cancer treatments) appreciate Holy Crap’s clean source of high protein,” notes vice-president of Marketing Claudia Howard. The company will announce a new flavour this fall.

No report on what’s new in protein would be complete without a look at very new sources. The production of cultured meat and plant-based products that look, smell, cook and taste just like meat are both being actively pursued due to increasing global concerns related to conventional livestock agriculture – concerns related to the environment (land and water use), animal welfare and risks to human health such as Salmonella.

On the cultured meat front, this year marks the first ever global conference dedicated to “cellular agriculture.” New Harvest 2016 was held on July 13 in San Francisco, organized by New York-based non-profit New Harvest. New Harvest CEO Isha Datar is also the co-founder of Clara Foods, which has just gained $1.75 million in private funding to create an egg white replacer made from genetically modified yeast (containing inserted chicken genes). Clara Foods hopes to market the product within the next few years, says New Harvest Communications director Erin Kim. “Cultured meat, however,” she notes, “will likely take longer as there are many more hurdles which must be overcome via research for the process to be commercialized on a large scale.” These hurdles include cutting costs and finding a non-animal culture medium (right now, bovine fetal tissue is used).

Plant-based meat replacement products are a whole other ball game, and one of the major players is Silicon Valley-based Impossible Foods. The firm just introduced the Impossible Burger – the first of many planned “meat” and “cheese” products – at Momofuku Nishi restaurant in New York, with a San Francisco restaurant rollout coming this fall. The firm states: “We aim to deliver, without compromise, every pleasure that meat lovers get from burgers – from the visual appearance and versatility of the raw meat, to the smell and sizzle during cooking, to the ultimate taste and texture of the burger…but made entirely from plants.”

How did Impossible Foods achieve this? Its scientists, drawing on money from many famous investors, including Google Ventures and Bill Gates, have spent years breaking down the components of ground beef and finding, extracting and assembling the same molecules (or molecules with the same properties) from plant sources. An important molecule for the Impossible Burger is heme, which is found in hemoglobin in blood and myoglobin in muscle tissue, but is also found in many plants. It gives the raw product its reddish colour, and turns a crispy brown when cooked, just like ground beef.

Beyond Meat, also based in southern California, is another big player in the plant protein mock meat market. In 2012 it launched its premier Beyond Chicken Strips product, which has been described as “surprisingly authentic.” The manufacturing process is only minutes long, involving rapid heating, cooling and pressurizing a mixture of non-GMO soy and pea proteins and other ingredients into a structure similar to that of meat. In 2015, Beyond Meat released its Beast Burger which the company claims contains higher protein, iron and other nutrient levels than beef burgers. Beyond Meat plans to release a product similar to raw ground beef by the end of 2016 into supermarket meat sections.

San Francisco-based Hampton Creek is another company using plant proteins, this time in place of eggs. It already sells its Just Mayo and Just Cookie Dough in more than 30,000 outlets in the U.S., including Walmart, with plans to add a ranch salad dressing, a scrambled-egg alternative and pasta.