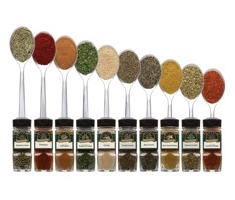 • McCormick Canada is making it a little easier for consumers to avoid adding fat, sugar and salt to foods. The company launched 10 Gourmet Super Spices with the greatest potential to improve health and to enhance foods in a healthy way.

Botanically, spices and herbs are classified as fruits and vegetables. That’s why these plant-derived ingredients are naturally high in antioxidants.

And since they no longer contain the water that makes up a significant part of the weight of fresh produce, spices and herbs offer a big antioxidant punch in a very compact package.

Spices and herbs are also rich in phytonutrients, such as carotenoids, flavonoids and other phenolics, which have health-promoting properties beyond being great antioxidants. The wave-shaped bottle began appearing on store shelves in February.

The company says the new packaging evokes the element of water in its design to convey a refreshing look.

The new bottle also adds a modern, dynamic image, and builds on other brand extensions such as the new Aquafina Plus+ Vitamins 10 Cal beverage, featuring a pure stevia extract natural sweetener.

• For those consumers who’ve had enough of winter, there’s Tropicana Essentials from PepsiCo Canada. What makes this 100 per cent pure orange juice different is that it now contains vitamin D, long known as the sunshine vitamin.

PepsiCo says consumer demand for alternative food and beverage sources of vitamin D is what led up to the launch.

That demand is fueled in part by media and health-care professionals who have turned the spotlight on the vitamin’s important contribution to health.

According to PepsiCo, Health Canada’s recommended daily intake of vitamin D for Canadians age two and older is 200 international units or five micrograms.

• Tostitos Salsa has unveiled its new salsa recipe – one the company says is its best-tasting salsa ever. The salsa is versatile in use, available in mild, medium and hot flavours, and can be served as a dip, condiment or ingredient to enhance the taste of any meal.

It’s made using vine-harvested tomatoes, onions, jalapeño peppers and a hint of garlic. The salsa retails for $3.49 for a 430-mL jar.

• A 2007 Ipsos Reid survey found that one out of two women in Canada say they think about their weight every day and one out of five women say that managing their weight has taken over their lives. With those kinds of statistics in mind, Danone Inc. in Canada launched Silhouette SatisfAction yogurt with a revolutionary Protei-Fibres formula.

The company says this breakthrough formula of milk protein and fibre helps women control their appetite and feel fuller longer.

SatisfAction contains all the vitamins and nutrients of Silhouette 0+ with no fat and no added sugar.

It could also be a smart way to help consumers curb their hunger between meals and manage their weight in the long term.

The yogurt has 80 calories per serving and comes in four flavours: Strawberry, Peach Mango, Red Fruit and Muesli, and Blackberry-blueberry and Muesli.

• Tetley is the official tea of the movie Alice in Wonderland. And to mark the occasion, Tetley has introduced limited edition tea blends and collectible tins. The limited edition collectible tins and canisters of tea depict Alice, the Mad Hatter, the Red Queen and the White Rabbit.

The cookies are Ginger, and Dark Chocolate Chip 70% cocoa and Cranberry.

Biothera, a biotechnology company, produces Wellmune WGP, which is a natural ingredient derived from the cell walls of baker’s yeast.

• Prana BioVegan Inc. has introduced Chia oil to make it easier for consumers to consume their daily requirement of omega-3s. Chia oil is prepared from the Chia seed, which is harvested and produced in Mexico.

More than five kilograms of Chia seeds are needed to produce one litre of Chia oil, a process whereby carefully selected seeds are cold-pressed to extract the oil. It’s then filtered and refined so that it obtains a golden colour and light, nutty flavour.

Prana organic chia oil comes in a 250 mL glass bottle and retails for $19.99 at health food stores and IGA stores.