Garlic can ward off more than just vampires

Pullman, Wash. – Garlic can ward off evil eye, keep vampires away, not to mention it has a whole slew of other health benefits.

And now, fighting the Campylobacter bacterium can be added to the list.

Researchers at Washington State University have found that a compound in garlic is 100 times more effective than two popular antibiotics at fighting Campylobacter, one of the most common causes of intestinal illness.

The researchers say the discovery opens the door to new treatments for raw and processed meats and food preparation surfaces.

Campylobacter is the most common cause of food-borne illness in the U.S. and around the world, say the researchers. Most infections stem from eating raw or undercooked poultry or foods that have been cross contaminated via surfaces or utensils used to prepare poultry.

The researchers looked at the ability of diallyl sulfide, the compound found in garlic, to kill the bacterium when the compound is protected by a slimy biofilm that makes it 1,000 times more resistant to antibiotics than the free floating bacterial cell.

Well what they found was that the compound easily penetrated the protective biofilm and killed the bacterial cells.

The same researchers had carried out work on diallyl sulfide and other organosulfur compounds and found the compounds effectively killed important food-borne pathogens, such as Listeria monocytogenes and Escherichia coli O157:H7.

The scientists caution that the work is still at the basic stage, well removed from an actual application. They add that eating garlic is generally a healthy practice but it is unlikely to prevent Campylobacter-related food poisoning.

However, diallyl sulfide may be useful in reducing the levels of the Campylobacter in the environment and to clean industrial food-processing equipment.

“Diallyl sulfide could make many foods safer to eat,” says one of the authors.

“It can be used to clean food preparation surfaces and as a preservative in packaged foods like potato and pasta salads, coleslaw and deli meats. This would not only extend shelf life but it would also reduce the growth of potentially bad bacteria.” 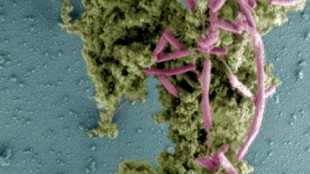