Scientists at the Institute of Food Research say Camplylobacter exploits “chicken juice,” which allows the bacteria to thrive in the food chain 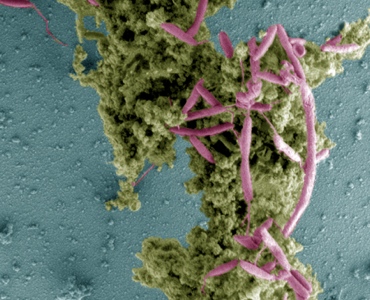 Colney, Norwich, U.K. – Scientists at the Institute of Food Research say they have found how Campylobacter can thrive in chicken plants and in home kitchens.

The scientists say that the bacteria’s persistence in these sites is helped by “chicken juice.” 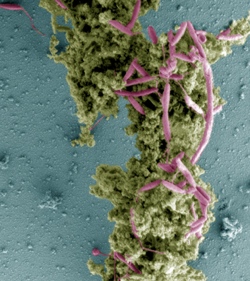 Campylobacter with the perfect environment to persist in the food chain.

This finding emphasizes how critical it is to keep surfaces in food preparation clean and could lead to more effective ways of cleaning that can reduce the incidence of Campylobacter.

How they did it

The Institute’s site explains that the researchers collected liquids produced from defrosting chickens and found that this helped Campylobacter attach to surfaces and subsequently form biofilms.

Biofilms are specialized structures some bacteria form on surfaces that protect them from threats from the enivronment.

“We have discovered that this increase in biofilm formation was due to chicken juice coating the surfaces we used with a protein-rish film,” explains Helen Brown, a PhD student.

“This film then makes it much easier for the Campylobacter bacteria to attach to the surface and it provides them with an additional rich food source.”

Campylobacter aren’t particularly hardy bacteria, so one area of research has been to understand exactly how they manage to survive outside of their usual habitat, the intestinal tract of poultry.

They are sensitive to oxygen, but during biofilm formation the bacteria protect themselves with a layer of slime. This also makes them more resistant to antimicrobials and disinfection treatments
Understanding this and how Campylobacter persists in the food production process will help efforts to reduce the high percentage of chickens that reach consumers contaminated with the bacteria.

Although thorough cooking kills off the bacteria, around 500,000 people suffer from Campylobacter food poisoning each year in the U.K.


Related Stories
Garlic can ward off more than just vampires
Salmonella: a tricky bug to remove from a plant
Scientists use hyperspectral imaging to detect Campylobacter