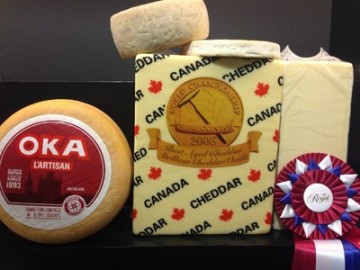 After evaluating more than 230 entries, the judges made their picks in The Royal Cheese Competition, held in advance of The Royal Agricultural Winter Fair’s 10-day run from November 6 to 15, 2015 at Exhibition Place in Toronto.

This year’s competition featured dozens of cheese producers from across the country.

“The quality of the cheeses competing this year was outstanding,” says Peter Hohenadel, The Royal’s director of Agriculture and Food. “We saw a lot of passion, creativity and talent on the table in all categories.”

The competition included more than 180 kg of cheese of all varieties. Funding support for The Royal has been provided by the City of Toronto and the Government of Ontario.