At a gala reception in honour of Canadian cheeses, the Dairy Farmers of Canada celebrated the winners of its ninth Canadian Cheese Grand Prix 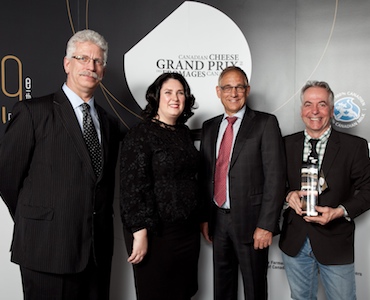 Toronto – Some of Canada’s best cheeses were celebrated on April 22 at a gala in their honour. 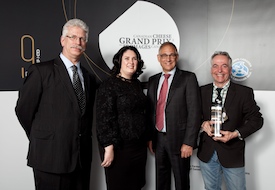 Pictured from left to right are: Reint-Jan Dykstra, vice-president of the Dairy Farmers of Canada (DFC); Caroline Émond, executive director of the DFC, and Wally Smith, president of the DFC with Jean Morin from the Fromagerie du Presbytère (QC), whose Laliberté cheese was named Grand Champion at a gala event in Toronto on April 22.

The event was the ninth Canadian Cheese Grand Prix Gala of Champions, where the Dairy Farmers of Canada (DFC) announced that Fromagerie du Presbytère’s Laliberté picked up the coveted Grand Champion title.

Fromagerie du Presbytère had entered its Laliberté in the cream-enriched soft cheese with bloomy rind category. The panel of judges selected Laliberté from 27 impressive category winners.

The DFC sponsors and hosts the Canadian Cheese Grand Prix is every two years. The event celebrates Canadian cheeses made with 100 per cent Canadian milk.

Fromagerie du Presbytère’s says its cheese Laliberté is named after Alfred Laliberté, the famous sculptor born in St. Elizabeth de Warwick, Que. The cheese took a year and a half to develop and is made with 100 per cent Canadian cow’s milk. 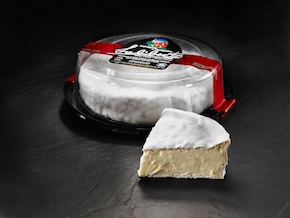 numerous other national and provincial awards.

The Grand Champion and 27 category winners were selected from a record-setting 268 cheese entries submitted by cheese makers from P.E.I. to B.C. In February, the judges narrowed the entries down to 81 finalists.

The DFC says Canada’s cheese industry has evolved to the point that new types of cheeses are continually being added to the Canadian Cheese Grand Prix.

This year, nine new categories were added to the competition, including three individual Gouda categories based on cheese age and a stand-alone category for Smoked Cheese.

Jury members tasted, touched and smelled each cheese, evaluating them for appearance, flavour, colour, texture and body, and salt content before determining the winners.