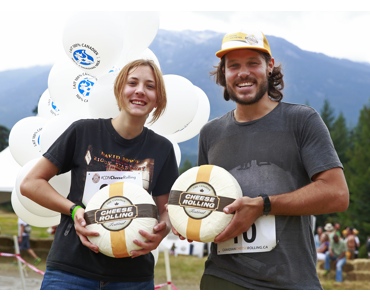 Whistler, B.C. – On a warm Saturday afternoon, 125 participants bravely competed on Blackcomb Mountain to chase after  an 11-pound wheel of cheese for the 7th Canadian Cheese Rolling Festival.

The festival is hosted by the Dairy Farmers of Canada, and also includes a costume contest and other activities for families. 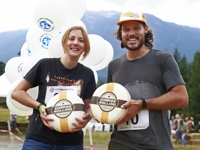 The cheese wheels were donated by B.C. cheese maker Natural Pastures. The two Grand Champions each took home a wheel of Canadian cheese and each won a Whistler season’s ski pass for two.

The winner of the men’s race was Jordan Lenham, from England, who completed the race in 6.4 seconds.

The winner of the women’s race was Ximena Abresch, from B.C., who completed the race in 12.4 seconds. Eleven race heats – seven men’s and four women’s – were held before the final Grand Championship races.

In addition to the men’s and women’s races, 104 children participated in uphill races.

Pictured are (left) Ximena Abresch from Trail, B.C. and Jordan Lenham from Cambridge, England who fell for Canadian cheese and were crowned champions at the 2014 Canadian Cheese Rolling Festival.