The ‘Namgis First Nation of B.C. is bringing its Land Raised salmon to market through Safeway stores in B.C. and Alberta 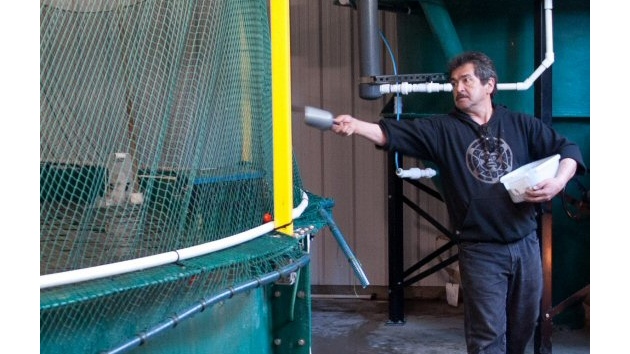 Kuterra Farm, which is owned by the ‘Namgis First Nation, was founded to offer a sustainable alternative to conventionally farmed salmon.

“The effects of conventional farming on the marine environment are very real to us,” says ‘Namgis Chief Bill Cranmer.

“This enterprise shows the way forward for the industry. It also fits with our economic plans and with our history as a fishing and trading people.”

The ‘Namgis say Land Raised salmon is the way to keep wild salmon and the waters they live in separate from farming and the way to grow quality farmed fish.

In the ‘Namgis language Kutala is the word for salmon. Terra represents land. So Kuterra means salmon from the land.

The advantages to the system include requiring 30 per cent less feed than ocean fish farms, and there’s no need for antibiotics or pesticides. The system also cleans and recirculates 98 per cent of the water it uses, and no waste is discharged into the environment.

The TimesColonist.com says the salmon will be harvested every two weeks, equaling about 1,000 tonnes annually.

The newspaper says smolts went into tanks at the $9.5 million ‘Namgis Closed Containment Salmon Farm in March 2013. Albion Fisheries is marketing and processing the salmon at its Richmond, B.C. plant. The salmon is being sold for $3.99 per 100 grams.