Health Canada’s proposed changes to the Nutrition Facts tables and ingredients lists could see all types of sugars grouped together. The proposed changes are from the first round of consultations and are meant to address parents’ concerns 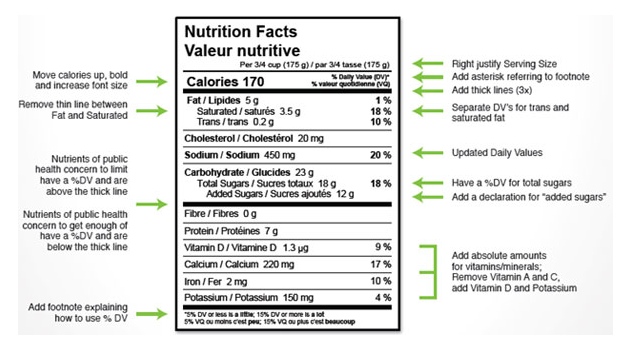 Edmonton, Alta. – After the first round of public consultations, Health Canada is proposing changes to how nutrition information is presented on food labels.

Rona Ambrose, Canada’s minister of Health, announced the changes on Monday. Further consultations will run for 60 days from July 14 to Sept. 11, 2014.

The proposed changes to the Nutrition Facts table include:

• Refreshing the format to make the Nutrition Facts table easier to read and to emphasize certain elements, such as calories, to help Canadians quickly locate this information.

• Requiring information about the amount of “added sugars” in a food product and/or adding a % DV for “total sugars” to help consumers identify if there is a lot of sugars in a food product using the education message on the % DV at the bottom of the table.

• Requiring the declaration of potassium and vitamin D, nutrients that many in the Canadian population are not getting enough of, which puts them at higher risk for chronic disease. Vitamin D is important for its role in bone health. Potassium is beneficial in lowering blood pressure. Vitamins A and C would no longer be required on the label because there is no evidence of a deficiency of these vitamins in the general population, though manufacturers could declare them voluntarily.

• Adding a message at the bottom of the Nutrition Facts table that would read: “5% DV or less is a little, 15% DV or more is a lot.” This message is in line with Health Canada’s education campaign and would provide Canadians a reminder on how to use the % Daily Value.

Ingredients lists will also be refreshed. Health Canada will require a consistent look for lists of ingredients, similar to the Nutrition Facts table.

Foods will also require the list of ingredients to appear in a distinctive box with a title, using black type on a white or neutral background for contrast, using upper and lower case letters, and having a minimum font size.

Health Canada is also proposing guidelines on serving sizes, which should be consistent on similar foods, making it easier for consumers to compare products and make healthier food choices.

The first guideline applies to foods that can be measured (cup, tsp, etc.). Here the serving size would be the reference amount (in millilitres or grams), shown together with the corresponding household measure. This means that similar products will state the same millilitre or gram amount.

This guideline would apply to products such as milk, cream cheese, yogurt, flour and rice.

This guideline would apply to products such as crackers, cookies, muffins, bagels, cakes and lasagna.

For certain foods, the serving size would be more helpful if it was based on the same consumer friendly household measure, rather than on the reference amount as used in Guidelines 1 and 2.

The serving size of ready-to-eat breakfast cereals, sliced bread, gum and multi-serving meat (for example, roasts, whole chicken) would be a consistent consumer friendly household measure reflecting the way these products are typically consumed, shown together with the weight of that serving in grams.

Industry response to the proposed changes has been cautious. The Food & Consumer Products of Canada says that given the label’s prevalence in people’s lives, each of Health Canada’s proposals “warrants thorough review.”

The Canadian Beverage Association says it welcomes the opportunity to review and comment on the proposed changes, the science behind them and how they will apply to all foods and beverages. The beverage industry has its own initiative on labelling called Clear on Calories.

The CBC.ca reports that nutritional sciences expert Dr. Thomas Wolever from the University of Toronto says the proposed changes call for a reduced emphasis on carbohydrates. Counting carbohydrates is important for those consumers who have diabetes, for example.