Turning up the dial on taste 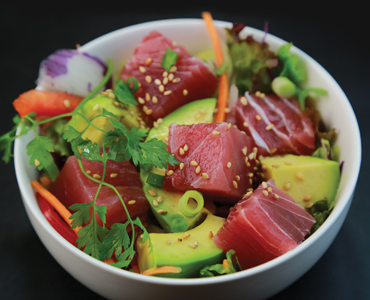 Last year’s flavour forecast was all about fermented food, “Asian 2.0” and the hunt for the new sriracha (it’s harissa, but it’s not quite there yet). But what will 2016 bring to consumers’ plates? Think Peruvian chilies, Chinese pork sandwiches, Hawaiian poké and Malaysian rendang curry, as the trend toward international flavours gets even more adventurous.

“Consumers continue to explore the globe looking for new flavours and food styles, which is something that’s been going on for a while, but they just keep digging in,” says Kara Nielsen, culinary director at Sterling-Rice Group, a Boulder, Colo.-based marketing firm that works with top food and beverage brands.

Here’s a look at some of the food and flavour trends set to surge in 2016:

The evolution of hot & spicy

For the past few years, hot and spicy foods have dominated the dinner table. But in 2016, heat and spice will get a refreshing twist.

“People have a real love affair with spicy foods and they’ve gone from wanting things that are super-hot and set your mouth on fire to wanting to appreciate that spiciness with flavour,” says Kevan Vetter, executive chef and director of culinary development at McCormick.

On its 2016 Flavour Forecast, McCormick identifies this trend as “heat plus tang,” whereby spice is contrasted with tangy accents such as lime, rice vinegar,

yuzu, Meyer lemon and cranberry. Examples of tangy heat include Peruvian chilies like rocoto, ají amarillo and ají panca paired with lime; and sambal sauce, a flavourful condiment from Southeast Asian made with chilies, rice vinegar and garlic.

“The cool thing about this trend is that the tang component helps balance out some of the heat and brings in a different flavour element,” says Vetter.

Michigan-based flavour and colour company Kalsec has been tracking hot and spicy flavours for the past few years. While the heat levels consumers want have continuously gone up, it’s starting to level off, says Gary Augustine, executive director of Market Development at Kalsec. “We’re now seeing a complexity to heat that we haven’t before,” he says. “We’re seeing the layering of flavours, such as combining spiciness with saltiness, sweetness, sourness or citrus.” For example, honey chipotle and mango habanero are showing up in prepared meals, snacks and sauces.

The next wave of ethnic foods

According to Technomic, a Chicago-based consulting firm, ethnic food is trending toward the more adventurous. Restaurant-goers are now seeking lesser-known specialties found at the food carts, kiosks, pubs and food halls of far-away destinations. Some foodie favourites are Hong Kong egg waffles; Rou jia mo, a Chinese sandwich made with pork that’s stewed with around 20 spices and seasonings; and Hawaiian poké, a raw fish salad.

“We’re seeing ethnic obviously continue to be a big player, but the difference now is there’s more of a focus on authenticity,” says Kristin Menas, associate editor, Canada & Adult Beverage at Technomic. “A lot of consumers are surprisingly ambivalent about the fusion of flavours within dishes.”

McCormick’s Flavour Forecast identifies Tropical Asian as an emerging trend, in particular the vibrant cuisine and distinctive flavours of Malaysia and the Philippines. Some examples are pinoy BBQ, pork skewers marinated with soy sauce, lemon, garlic, sugar, pepper and banana ketchup; and rendang curry, a Malaysian spice paste that delivers mild heat and is made from chilies, lemongrass, garlic, ginger, tamarind, coriander and turmeric.

“People are starting to eat more adventurously and they are looking to other global cuisines,” says Vetter. “Particularly as millennials are getting older and evolving, the expectation for adventurous food is being enhanced.”

Another key trend for 2016 is savoury alternatives to typically sweet foods like yogurt and desserts. Sterling-Rice Group sees a rise in popularity of labneh, the thick, salted Middle Eastern yogurt. Labneh, which is often served with olive oil, spices and seeds, has all the health benefits of yogurt, but with less sugar and a rich, savoury taste.

“It’s great for dips and flatbreads, and is a terrific foil for a lot of sweet vegetables like carrots, tomatoes and butternut squash,” says Nielsen. “For manufacturers, there are a lot of opportunities on the dip side, the salad dressing side, and the yogurt case itself.”

Savoury flavours are also turning up in desserts. According to Sterling-Rice Group, pastry chefs, ice cream makers and candy manufacturers are tapping into flavourful ingredients such as dairy whey, malt and umami-rich miso paste to add new dimensions to desserts and treats. Gearharts Fine Chocolates, for example, launched Miso Caramels made from cream, butter, toasted and sesame seed, and accented with miso.

Introducing more savoury ingredients to baked goods can include using rye flavour or ancient grains in a brownie mix, says Nielsen. “We’re seeing that in the gluten-free space, but they can add a lot of flavour and nutrition to other baked goods.” Nielsen also sees a lot of opportunities for ice cream manufacturers to play with more intense, smoky umami flavours.

McCormick’s “blends with benefits” trend – herbs and spices combined with good-for-you ingredients – also ties into the move toward the less sweet side of things. “We know that herbs and spices are a great way to introduce flavour if you’re trying to take out the fat, sugar or salt,” says Vetter. “And when you pair them up with ingredients such as chia seeds, matcha and flax, they are a dynamic combination.”

The trend toward more interesting flavours and healthier ingredients is spilling into the beverage category. “There is a continued interest in finding convenient, accessible beverages that fit consumers’ lifestyles, have less sugar, and are alternatives to some of the things they may have been drinking in the past,” says Nielsen. “There are really interesting new beverages that offer the consumer a much wider choice set. [Beverage makers] are building off the excitement in the cocktail space and craft beer space.”

The company also notes the emergence of a trend it calls “coffee’s new guises.” Coffee “mocktails” are being sold in foodservice, and beverage makers are launching creative brews in bottles and cans. For example, Colorado-based Pixán makes a line of cold coffee fruit-infused beverages, and last spring, Albuquerque, N.M.-based Caveman Coffee launched nitrogen-infused cold brew in a single-serving can.

In the foodservice arena, Technomic sees the rise of the slow-coffee movement, which focuses on quality, single-origin coffees, limited bean batches and “pour over” techniques. The trend is making its way to packaged goods, with coffee chains and independents starting to bottle their cold-pressed coffees. “Even though people want high-quality slow coffee, they’re still interested in having that option at home, whether it’s through bottled coffees or packaged coffees,” says Menas.