Much ado about ginger

Ginger’s star has been on the rise for a couple of years now, and its popularity as an ingredient is showing no signs of waning 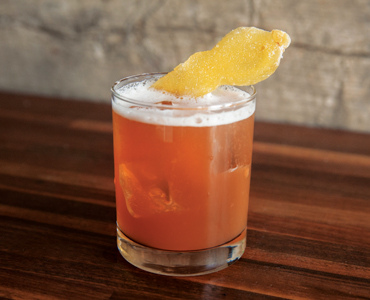 Ginger certainly isn’t a new ingredient – in fact, it’s quite the opposite. Those famous gingerbread man cookies have actually been in existence for several centuries, for instance. And who among us didn’t drink a glass of good old ginger ale to soothe a tummy ache as a child?

But make no mistake about it: despite its ancient status, ginger is currently experiencing a renaissance as a rising star in the ingredient/flavour world, with new and innovative uses for ginger showing up in food products with increasing frequency for the past couple of years.

Why is ginger so big right now?

“I think there are a number of reasons why ginger is so popular,” says Anton Angelich, group vice-president – Marketing, at Virginia Dare in New York. “One reason is that North Americans are getting much more adventurous in their eating, thanks to the Food Network and all these cooking shows…People are

looking for things beyond the ordinary.”

So, as Chinese North American cooking moves beyond Egg Foo Young and Sweet and Sour Chicken Balls, he says, people are becoming more exposed to ginger as an ingredient in some of the more adventurous Chinese recipes they’re trying, and are finding they really like it. “I also think that ginger showing up with sushi has brought the taste of ginger to a lot more people,” adds Angelich.

He notes that the current trend toward clean eating also favours ginger as an ingredient. “People are looking for clean labels, simple ingredients; it’s all the Michael Pollan stuff – ‘Don’t eat anything your grandmother wouldn’t recognize,’” says Angelich.

In its basic form, ginger is a perennial flowering plant, with a history that stretches back more than 5,000 years. It originated in Southeast Asia, but eventually spread throughout the world. From early on in its history, it’s been considered a tonic root for treating a variety of common ailments, especially digestive ones.

Today, it’s still considered to have various medicinal properties, from preventing colds and flu, to aiding in digestion. “Probably the one that’s best known to a wide array of consumers is as an anti-nausea treatment,” says Angelich. “But ginger’s got so many benefits, health-wise.”

While the health benefits may be one driver for the growing popularity of ginger, the flavour itself is clearly appealing to consumers, and becoming increasingly so as more people become exposed to ginger in a variety of new ways. With its uniquely spicy “bite,” the addition to ginger to a food or beverage can add an unmistakable flavour kick. “And there’s a certain amount of earthiness to the taste of ginger, I think, that makes it very natural,” says Angelich.

Where are we seeing ginger?

The use of ginger in beverages is on the rise. According to Innova research, ginger as a flavour and/or ingredient in beverages has grown continuously on an international scale since 2009. “Craft sodas are one place where you definitely see it,” says Angelich. And ginger beer – a traditional non-alcoholic beverage that’s long been popular in England, Australia and the West Indies – is now finding popularity in North America as a cool and trendy soft drink.

On the alcoholic beverage side, ginger is increasingly being used as an ingredient in craft cocktails by creative bartenders and mixologists. And ginger in tea – particularly herbal teas and green teas – is something we’re seeing on store shelves more and more these days. We’re seeing a lot of green teas that mix ginger and some sort of fruity flavour, for instance, such as Tazo’s Green Ginger tea (which incorporates “a sweet note of pear” into the blend), or Stash’s Organic Lemon Ginger Green Tea.

Interestingly, it’s also becoming an ingredient in snack foods – Virginia Dare was handing out ginger fruit and nut bars to attendees at a couple of recent trade shows, and they were very well received, according to Angelich. “We’ve also seen it pop up in things like gourmet craft ice creams and sorbets,” he adds. “And ginger also gets involved in these fusion mixtures, like Korean tacos or Mexican ice cream – things where they’re combining culinary traditions of various cuisines.”