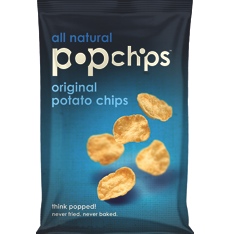 All-natural Popchips are a new crispy chip innovation from San Francisco, Calif.-based Popchips Inc. Neither baked nor fried, these potato snacks are “popped” with heat and pressure. Seasoned with natural flavours, Popchips contain no preservatives or artificial colour, no cholesterol, saturated fat or trans fats, making them less than half the fat of fried chips. The snacks are available in 83-g bags and 23-g single-serve portions in seven varieties – Original, Barbeque, Sour Cream & Onion, Cheddar, Salt & Pepper, Sea Salt & Vinegar, and Parmesan Garlic. All of the varieties are kosher-certified, and the Original flavour is vegan.

Male, 30-something
Popchips Parmesan Garlic. “These tasty morsels came very stongly flavoured – maybe too strong? The novel, secret cooking method yielded a very nice textured snack that blows away the awful melt-in-your-mouth feel of similar rice-based snacks. The chip was crunchy and maintained its potato flavour. The chips appeared to be greasy and had a fantastic olive oil aroma yet no hint of oil was found. The ingredients list betrayed that, however, listing safflower and sunflower oils as the second and third ingredient, respectively.”

Female, 40-something
Popchips Cheddar. “The Cheddar popchips were a great surprise! I’m not usually a chip eater – I hate the greasiness – but these were true to their word: non-greasy, light and flavourful. They were also much better than the dry rice crackers I thought they’d compare to. The aroma when I opened the package was delicious, and I found the flavour to be the same rather than overly cheesy like some processed cheese-flavours can be. I love that these are all-natural and are lower in fat. And the 100-calorie portion packs are perfect for a light afternoon snack. The larger bags would also make a great family snack.”

Male, 20-something
Sea Salt & Vinegar. “The vinegar delivers a sharp kick. It could almost clear my sinuses. Nice flavour, with a bite. They’re not really chips; they’re thicker and more dense. Could be great for dipping. My first thought was, ‘healthy chips, that’s no fun.’ But these taste great. I’m not sure if I’d go into Shoppers Drug Mart purposely to buy them, but if I’m there I might pick up a bag. Are these in movie theatres?”

Female, 30-something
Popchips Salt & Pepper. “The flavour was a little too peppery for me. I found that the texture was similar to rice crackers, but the popped chip has a better texture, with no glossiness. The chips were light, not greasy, and thus offered the feeling of a healthier snack, without compromising crunchiness.”

Male, 30-something
Popchips Barbecue. “I’m not generally a fan of barbecue flavour, but these are tasty. Just tangy enough. But I think I prefer the Original.”

Female, 30-something
Popchips Barbecue. “Barbecue chips are my favourite. And I really love these. The barbecue flavour is a little smoky, and very tasty. It has just enough bite. And when you see the Nutrition Facts table – what’s not to like? They’re low in sodium (relatively speaking – it is just a small bag) and just 100 calories. They’re not greasy and they don’t seem heavy tasting at all. On second tasting, though (I waited a bit), the flavour did seem a little powdery and artificial. But you can’t beat the texture – each chip is thick and super crunchy. The barbecue does leave an aftertaste, but overall I’d buy these again.”

Male, 40-something
Popchips Sour Cream & Onion. “Contained in a very easy to open bag with good-looking simple graphics, the popchips were actually a very tasty surprise. Not greasy, not dry, just a very good potato chip. And though I have stated that it is a very tasty chip – in fact, I might say it’s the best tasting commercially made potato chip I’ve had – but I want more POP in its seasoning. Give me more sour cream and onion. Right now it’s subtle; I’d prefer it to be a little less so.”

Female, 30-something
Popchips Original. “They smell like other regular chips, but they are much less greasy and so crispy! I’m a huge fan of chips and have never tasted anything like these before. They’re like a cross between rice cakes and chips, but much better. I’m not exactly clear on how they’re made (not fried and not baked, just heat and pressure) but it sounds good (and guilt-free!) to me. I love the texture; each chip is a little puffy. And you can actually see the potato slices in them. My three-year-old son had no complaints either. He said they were ‘yummy’ and insisted on finishing the bag. I love that there is no visible greasiness to them and none left on my fingers. Other chips seem flimsy in comparison now. Do they come in a bigger bag? The packaging is kind of funky too. I tried both Barbecue and Original and have to say Original wins – and I would buy them.”

Male, 30-something
Popchips Original. “The packaging could use some work; seems a little plain. I love the flavour. Much more like real potato chips than other low-fat chips I’ve tried. I can’t believe they only have three grams of fat per bag.”