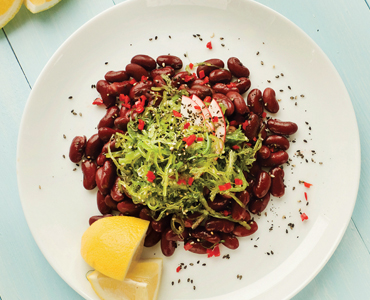 Seaweeds (marine macro-algae) have been a dietary staple for centuries or even millennia in coastal regions around the world, from Asia to Iceland to New Zealand, from many European countries to the Canadian Maritime provinces. Now, despite having been consumed for centuries, seaweeds are being touted as a new superfood in North America.

Packed with fibres, proteins, micro-elements and minerals, seaweeds are already recognized as versatile and adaptable ingredients

in a number of different applications within and outside the food industry, in everything from flavoured nuts to cosmetics to fertilizers. Of the approximately 10,500 known seaweed species, about 500 have been used throughout history for human consumption. Of those, about 220 are now cultivated, almost all in six Asian countries. But make no mistake – it is a huge industry. While it may be a surprise to us Westerners, seaweed production represents a whopping 49 per cent of total world marine aquaculture, with fish cultivation at only 11 per cent.

So those who wish to promote more seaweed consumption in the Western world are battling a decided lack of appreciation and knowledge for this resource. “How do we go beyond these stories that pop up every six months in the press about seaweeds being the next superfood?” asks Dr. Thierry Chopin, former president at the Aquaculture Association of Canada, scientific director of the Canadian Integrated Multi-Trophic Aquaculture Network (CIMTAN) and professor of marine biology at the University of New Brunswick in Saint John. “In the Western World, people still mostly view seaweeds as yucky stuff strewn on the beach. They don’t realize it’s in the products they use every day from morning to night. Carrageenans from red seaweeds are in orange juice to suspend the pulp, and alginates from brown seaweeds are in your toothpaste to keep it a paste. Sushi is getting more popular all the time, yes, but people don’t really realize they are eating nori, a red seaweed, as the wrapper. No one gets excited about the wrapper!”

Seaweed is harvested for two purposes, one being the extraction of hydrocolloids (alginate, agar and carrageenan) which are used for their gelling, water-retaining and emulsifying properties in many different food and non-food products. The other reason seaweed is harvested (from wild or cultivated sources) is for direct consumption in food products.

“Edible seaweeds are becoming more popular in Western countries and have undergone explosive growth in recent years,” notes Nicholas Gardner, general manager at Marinalg International, a global trade association. “While still not embraced by the mass market consumer as a superfood, probably due to some aspects of taste and texture, as the industry learns how to harness the valuable aspects of seaweed (including umami flavour) while managing some of the negative perceptions, growth will be even brighter.” Seaweed snacks are getting popular, and it’s also now found in noodles and used to flavour snacks such as nuts and chips. Marinealg says that seaweed snacks grew from $250 million to $500 million in 2014 in the U.S. alone, and are expected to grow substantially each year going forward.

Several Canadian companies are building the hydrocolloid and direct consumption seaweed markets. One is BC KELP, which harvests seaweed by hand from a government-licensed area close to the Alaska border between Haida Gwaii and Prince Rupert. It mostly harvests Bullwhip kelp and Bladderwrack, but also small batches of Macro, Wakame and Kombu. The processed seaweeds are sold directly to customers as well as through retail and wholesale avenues. “The demand for seaweed has fluctuated in recent years, but in the longer-term trajectory, it has slowly increased,” notes BC KELP owner Holger Dreskrueger. He attributes that to the growing availability of online information, and says that some seaweeds can be eaten “as is” in different dishes, while others should be soaked to make tea or added to other ingredients as they cook.

Acadian Seaplants, which was founded in Dartmouth, N.S. in 1981, is a global leader in seaweed cultivation and processing for many markets. Media manager Ashlea Barr says the demand for seaweed in food products has gone up in the last few years as today’s consumers become better educated about the health benefits of many foods. They also, she notes, have a greater understanding of and exposure to foods from around the world because of increasing travel and migration trends.

The company’s Hana Tsunomata seaweed “sea vegetables” products are grown in a land-based aquaculture system, and Barr says sales are booming all over Canada and the U.S. through both traditional and online distribution channels. Acadian Seaplants also grows Irish Moss seaweed, used for filtering in breweries. “Demand peaked and was in decline when cheaper chemical clarifiers became available,” Barr explains, “but with the growth of microbreweries and organic brews, we expect demand to expand.”

Seaweeds are not just used to clarify beer. In March 2015, Picaroons Traditional Ales in Fredericton, N.B., released Kelp on the Way, an ale that contains Sugar Kelp seaweeds produced by Cooke Aquaculture, a CIMTAN partner. Described as dark and smoky, and ale’s first batch sold out in three days. “I think it sold out so fast because it was new, local and it has great flavour,” Chopin says.

With the momentum that now exists in Canada, Chopin believes it’s high time for more seaweed product development and aquaculture. “Marine cultivation of seaweeds in an Integrated Multi-Trophic Aquaculture (IMTA) system with other species like salmon, mussels, sea cucumbers and sea urchins provides many ecosystem services and benefits, such as capture of released nutrients from the feeding of other species in the system. Growing seaweeds in these systems also provides oxygen, sequesters carbon and could locally reduce ocean acidification.”

In an effort to diversify seaweed use as much as possible, Chopin and Cooke Aquaculture of Blacks Harbour, N.B. are looking into new ways to boost human consumption, but also at cosmetic applications and the use of seaweed to partially replace fishmeal in the feed given to cultivated salmon and sea urchins. They are also working on transforming some of the crop into biochar for use as a plant substrate in freshwater IMTA systems (also called aquaponics). The two species of kelps cultivated by Cooke Aquaculture both gained organic certification in 2014. “We are growing, harvesting, drying and developing markets for these organically certified seaweeds,” says Nell Halse, Cooke vice-president, Communications. “This is an interesting opportunity for us and it is generating interest in the marketplace. However, the project is still at a small scale so it is too soon to comment on progress.”

Diversified aquaculture that includes seaweed is important for another key reason, in Chopin’s view – simply that any monoculture crop is vulnerable to a variety of unforeseen factors, such as bad weather or diseases. “We mostly grow salmon in Canada, and we need to educate consumers that seafood is more than fish,” he says. “Highly colourful and delicious dishes can be prepared with seaweeds that can reveal wonderful flavours and have an excellent nutritional value. Only in English are these organisms called the weeds of the sea. In many other languages, they have much more flattering names!”