Rome, Italy – A new report on aquaculture has found that the industry has a critical role in reducing poverty and combating food insecurity.

The report has found that aquaculture is now the fastest growing source of animal protein in the world and currently provides nearly half of all fish consumed globally.

And the report forecasts that by 2012 more than 50 per cent of the world’s food fish consumption will come from aquaculture.

The UN is calling on governments to step up their efforts to support the practice.

The report has also found that while the industry has grown, playing an important role in reducing poverty, it hasn’t grown evenly throughout the world.

The report warns that governments need to invest in aquaculture so they can continue to enjoy its benefits and address the challenges that are linked to the industry.

The UN says key concerns regarding aquaculture include:
• quality and safety standards;
• traceability;
• certification; and
• eco-labelling.

In addition, aquaculture faces major challenges due to climate change and the economic downturn in many countries, which could particularly affect small producers in Asia and Africa, where they make up the backbone of the industry.

The report suggests governments increase their efforts to assist small-scale producers by organizing them into associations and through the promotion of better management practices to ensure the industry can continue to meet the global demand for fish. 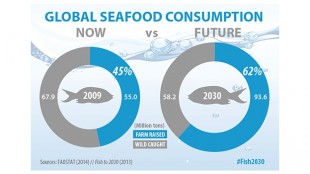