A joint report from the World Bank, the Food and Agriculture Organization of the United Nations, and the International Food Policy Research Institute has found that two-thirds of the world’s food fish will come from aquaculture as wild fisheries will level off 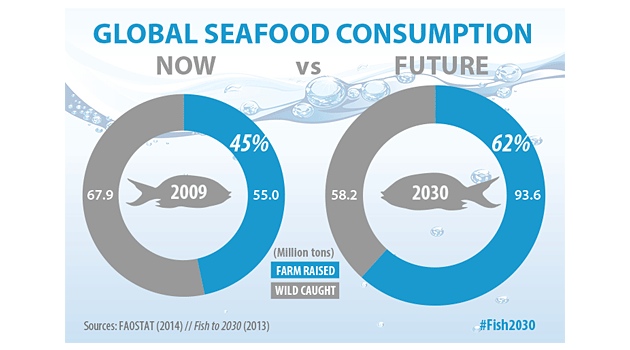 Washington/Rome – A new report has found that by 2030 two-thirds of the world’s food fish consumption will come from aquaculture or fish farming.

This will be due to wild-capture fisheries levelling off and demand from emerging middle classes in certain countries – especially in China – rising substantially.

The joint report, called Fish to 2030: Prospects for Fisheries and Aquaculture, is by the World Bank, the Food and Agriculture Organization of the United Nations (FAO), and the International Food Policy Research Institute (IFPRI).

The FAO says currently 38 per cent of all fish produced in the world is exported and in value terms, more than two-thirds of fishery exports by developing countries are directed to developed countries.

A major and growing market for fish is coming from China, which is projected to account for 38 per cent of global consumption of food fish by 2030, says the report.

China and many other nations are increasing their investments in aquaculture to help meet the growing demand.

Asia — including South Asia, South-East Asia, China and Japan — is projected to make up 70 per cent of global fish consumption by 2030.

Sub-Saharan Africa, on the other hand, is expected to see a per capita fish consumption decline of one per cent per year from 2010 to 2030 but, due to rapid population growth of 2.3 per cent in the same period, the region’s total fish consumption will grow by 30 per cent overall.

The report predicts that 62 per cent of food fish will come from aquaculture by 2030 with the fastest supply growth likely to come from tilapia, carp, and catfish.

Fisheries and aquaculture are a vital source of jobs, nutritious food and economic opportunities, especially for small-scale fishing communities. Yet threats from large-scale disease outbreaks in aquaculture and climate change-related impacts could dramatically alter this.