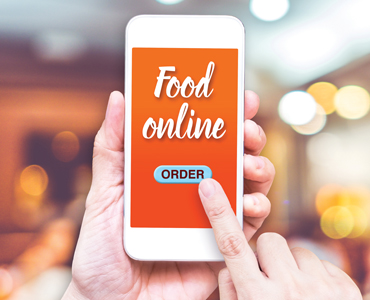 Buying consumer goods has never been easier. With a few mouse clicks items from around the world can be delivered to the

doorstop within hours. But rapid retail hasn’t just changed the way items are purchased. It has also altered the way people expect food companies to interact with them, and those expectations are leading to the creation of new business models and practices.

When it comes to developing a new way of doing business, Vancouver Food Pedalers Cooperative has been blazing new trails with its production and delivery methods. The co-operative grows microgreens, including buckwheat, pea, sunflower, radish sprouts, along with wheatgrass, and micro-microgreens including cilantro, kale and arugula. The sprouts are planted in trays containing organic soil and are grown inside a shipping container that has been retrofitted into a greenhouse. Harvesting twice a week nets the co-op between 200 and 250 trays of microgreens for its restaurant, grocery store, farmers’ market and residential customers.

But beyond the location of the farm, which is adjacent to a factory property in a light industrial area of the city, and the unconventional greenhouse, Vancouver Food Pedalers has made a name for itself thanks to its delivery methods. The co-op uses bicycles to get around the city.

When fully loaded with equipment (including a hand-cranked juicer for producing wheatgrass drinks) and produce for a day at a farmers’ market, the electric bikes pull trailers weighing up to 200 lbs. For general deliveries to the co-op’s residential, retail and restaurant customers, smaller, lighter trailers are typically used on delivery routes that can cover up to 40 or 50 km. Jarvis said the compact nature of the city makes bikes the ideal delivery vehicles, but the efficiency of the delivery process is a key to maintaining profitability.

“We’re strategic in terms of markets. Some are just off limits due to terrain. They’re just not accessible as they are uphill,” says Ross Jarvis, pedal services specialist for the co-op. “We make people aware that we need to be able to deliver. We’re fairly accommodating and we do what we can, but time is money to a degree. If we have to spend 25 minutes on a delivery it almost becomes financially not that viable.”

Sharing more of its vendors’ stories online is one of the goals of Local and Fresh Food Marketing Inc., a Regina-based online vendor of Saskatchewan-produced food items. Since launching 18 months ago, approximately 40 producers have begun to offer over 900 different products, including pulses, value-added dry goods, fresh and frozen meats, fresh produce and general grocery staples.

Local and Fresh’s owner and general manager Andrew Rathwell believes that connecting consumers with producers is a way to not only increase interest in local food, but to create trust that permeates throughout the food chain. “We have the ability to tell producers’ stories to let consumers know it isn’t just lettuce, it’s Mary Campbell’s lettuce and this is how Mary makes her lettuce and this is why she’s passionate about it. Some of these parts that have been driven out of a world that says food is a commodity sold by the pound. In an online business, or on the doorstep, we are able to tell that story. That’s what creates the accountability in the food system.”

Rathwell is also determined to develop trust with local producers. That’s being done in part by using the capabilities of the inventory and delivery management software from Colorado-based Delivery Biz PRO to better predict future orders and to give producers a more accurate sense of how much to supply in order to meet growing demand for their goods. The other way it is done is to promote lesser known brands or products.

Creating a demand for a new product is something Nimi Kular, co-founder of Toronto-based Nutrisense Inc., is learning to do. The company produces the Jaswant’s Kitchen brand of Indian cooking spices based on recipes created by Nimi’s mother, Jawant Kular, a nutritionist and food scientist, whose recipes and spice blends designed to make it easier to learn how cook traditional Indian dishes.

Promoting the company’s products has meant mixing long-established practices (such as offering up tastings in stores) with newer approaches. Setting up booths at craft shows (where there is less competition from other food vendors), such as the One of a Kind Show & Sale has worked well. And partnering with The Shopping Channel has also started to yield results. While the TV shopping network hasn’t yet featured Jaswant’s Kitchen in its own on-air segment, it does list the products on its website and cross-promotes them to TV viewers. “There have been a couple of times they’ve had celebrity chefs who sell different types of products like pans,” says Kular. “So when they are doing those demos, they try to take products that they also sell on TSC and do a cross-promo. It always boosts our sales.”

Making things easier for consumers is also what Rose Reisman, owner of Rose Reisman Catering in Toronto, is doing. In addition to providing catering for corporate events and supplying meals to schools and camps, the company offers its Personal Gourmet line that delivers fresh or frozen meals to customers on a daily basis. Doing this means running a 24/7 operation so orders can be dropped off at people’s homes between 10 p.m. and 3 a.m. when the trucks aren’t being used for catering deliveries. The company is currently updating its website to be more user friendly on the front end to simplify the ordering process and more efficient on the back end.

“The back end will be printing out the reports we need so there are not mistakes made,” says Reisman. “One big thing now is everybody is on special diets so they want this removed and that removed. Right now we are doing it manually so mistakes happen. The new system will allow us to have all the reports documented, so they will see them right away, so there will be no errors. It is almost as if it’s magical how it happens.”

While Reisman thinks the meal delivery business has a hit a plateau, others see nothing but growth as consumers become accustomed to getting not just groceries but meals delivered to their doors.

In summer 2015 the UberEverything division of Uber launched its UberEats restaurant meal delivery service in a number of cities, including Toronto. Since then the service has expanded its hours of operation, and increased the number of its restaurant partners. For a delivery charge of $4.99 an Uber driver will pick up a take-out order and deliver it anywhere across the Greater Toronto Area (there is also a $1.99 delivery option that covers a few select lunchtime menu offerings that can be prepared and delivered in 10 minutes or less). As with Uber passenger transactions, the car making the delivery is tracked and visible within the app. That same app is what notifies the restaurant of the order and summons the driver just before the food is ready for delivery.

According to Bowie Cheung, the Toronto-based general manager UberEverything, restaurants are able to expand the clientele even if they aren’t dining in. “Our restaurants are seeing quite a lot of incremental volume, which is intuitive in a lot of ways. Because if you think about lunch as an example, the distance, the area you are able to cover through delivery is so much greater than your typical walk-in traffic.”