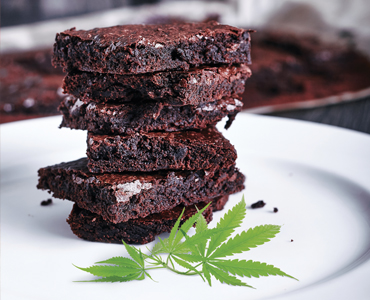 Come next year, some heady new treats will be legally available to Canadians: cannabis-infused edibles. While recreational marijuana is set to be legal as of July 2018, edibles were initially prohibited. Last November Bill C-45, or the Cannabis Act, was amended to include “edibles containing cannabis” and “cannabis concentrates,” set to become legal in July 2019.

Though regulations around marketing, sales and distribution are still being worked out, edibles could be a big growth opportunity for food processors and cannabis companies. A report by Mackie Research Capital Corp. forecast the Canadian marijuana market (dried marijuana and extracts) to reach $2.8 billion in 2018, assuming full legalization. And if U.S. figures are a harbinger for Canada, edibles could be a sizable part of the market.

In Colorado, Washington and Oregon, where marijuana is legal, edibles are the third most popular cannabis product, capturing

12 per cent (US$269.8 million) of the US$2.33 billion cannabis market in 2016, according to BDS Analytics. Marijuana flower leads with 58 per cent of the market, followed by concentrates at 20 per cent. In Colorado, candy is the most popular edible (46 per cent market share), followed by chocolates (21 per cent) and infused foods such as baked goods (nine per cent).

In Canada, consumers seem eager to indulge in edibles. A September 2017 study from Dalhousie University in Halifax found that 46 per cent of Canadians would try cannabis-infused food products if they became available on the market. The top types of cannabis-infused products they would consider buying are bakery products such as brownies and muffins (46 per cent), any ready-to-eat products including candy (27 per cent), oil (24 per cent) and spices (18 per cent).

“In our study, 68 per cent of Canadians said they are in favour of legalized cannabis, and of the 68 per cent, 93 per cent are willing to try edibles. That’s a lot of people,” says Sylvain Charlebois, dean of the Faculty of Management and professor in Distribution and Policy at Dalhousie University. “Allowing edibles was actually a good call. They’re already readily available [illegally], so if they remained unregulated in a marketplace where cannabis is legalized, I think it would have created some major problems. Now, they can be regulated properly around packaging, dosages, sales and distribution.”

In advance of the legislation, companies are looking to capitalize on Canada’s new green rush. 48North Cannabis Co. is the parent company of DelShen Therapeutics, a licensed producer of medical cannabis. The company plans to expand into edibles. “What we want to be is a consumer packaged goods company,” says Alison Gordon, CEO of 48North. “We grow cannabis as part of our license. But we really are looking to turn that cannabis into products that consumers want, including edibles and drinkables, as the regulation allows.”

To do so, Gordon says 48North is meeting with food and beverage companies to explore partnership or joint venture opportunities. For food processors, a partnership with a cannabis producer could be a chance to get in on the edibles market early. The only license that currently exists for producing and selling cannabis is the Access to Cannabis for Medical Purposes Regulations (ACMPR) license for medical marijuana. It is expected that the government will issue licenses for producers for the recreational market at a later date.

“The licensed producers, those of us who fall under the ACMPR program, will likely get a first crack at [making edibles],” says Gordon. “We can sell cannabis, we understand cannabis and we understand infusion…So, as I meet with these companies that have decades of experience in distribution, manufacturing, formulation, I say, ‘Why don’t we bring our knowledge together and create those products?’”

In the new world of legal weed, edibles producers already in operation may have the opportunity to become legitimate food brands. “The small guys really have a chance to go big…and in the year ahead, a lot of underground edibles brands will be focused on becoming legal,” says Lisa Campbell. Campbell and Sarah Gillies co-founded Toronto’s Green Market, a pop-up event featuring craft cannabis food and beverage products.

“A lot of [our vendors] are mom-and-pop edibles companies that have had to expand out of their home kitchens into commercial spaces, due to demand,” says Campbell. “And people are paying a lot of money to get nice branding done as well. So while it started as a very grassroots thing, the potential for them to scale is enormous.”

Though details on the sale and distribution of edibles are fuzzy, regulations for recreational marijuana are up to the provinces. In Ontario, the government-run LCBO will also run recreational marijuana shops, and its support of local wine and beer producers bodes well for edibles entrepreneurs. “If craft producers are able to sell directly to government, that will help the LCBO meet its mandate of supporting craft and local brands,” says Campbell. “The supply gap is a serious issue, and if we create a supply chain that’s too complicated and is in favour of giant corporations, then it’s kind of a counterintuitive message.”

Denver-based Dixie Brands makes a range of cannabis-infused products such as chocolates, fruit tarts, gummies and elixirs. Some products contain THC, the compound responsible for the psychoactive effects of cannabis, while others contain cannabidiol (CBD), a non-psychoactive compound. CBD is said to be helpful for a variety of health conditions, including anxiety and chronic pain.

“CBD is generally associated with health and wellness and has really  become a white-hot segment of the edibles space,” says Tripp Keber, who was CEO of Dixie Brands at the time of this interview but has since handed the reins to his business partner and Dixie co-founder Chuck Smith. “There’s no coincidence that historically, seven of the top 10 SKUs in Dixie’s offering contain CBD,” says Keber. “I think what you’re going to see is a massive inroad of product manufacturers like Dixie that will be bringing more CBD products into the market.”

While not all edibles will take consumers on a buzzy adventure, marijuana still has a stigma to shake. “[Food processors] don’t want to compromise their brand equity. So, depending on the company, of course, they will see this opportunity very differently,” says Charlebois. “For example, I don’t think Loblaw would want to actually sell cannabis-infused food products using the President’s Choice label yet. But it may be coming at some point.”

And while many marijuana proponents see  cannabis as a health and wellness product, that’s not the case with most Canadians. In the Dalhousie survey, nearly 53 per cent of respondents disagreed that marijuana is a healthy ingredient for their diets. “The benefits of eating cannabis-infused food products aren’t really clear,” says Charlebois. “Is it really recreational? Is it just for fun? That needs to be defined, because in the whole area of functional foods the focus has been health. If it’s not healthy, then why would you eat it in the first place?”

For companies looking at the edibles space seriously, Charlebois says: “You have to understand why people would buy [edibles] in the first place, other than being curious and buying it once or twice.”