A Taste of Honey

Consumers are turning to the sweet stuff for flavour and health 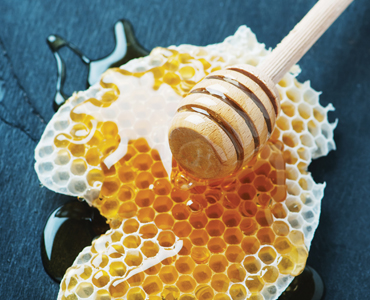 Honey’s future looks golden. According to international business reports, the global market for honey could reach 2.4 million tonnes by 2022 as increasingly health-conscious consumers reduce their sugar intake and seek out natural alternatives to artificial sweeteners. At the same time, there is growing interest in monofloral honeys, such as Manuka, made from the nectar of specific plants and purported to contain anti-cancer and other medicinal properties.

Canada is well-positioned to take advantage of the growth in consumer interest. In its 2016 report on honey products,  Agriculture and Agri-Food Canada notes that national honey production had reached an all-time high of 43,227 tonnes — up 11.4 per cent over 2014 — due to improvements in hive health, an uptick in urban and hobby beekeeping, and the rising popularity of crop pollination services. Retail sales of honey products rose by a compound annual growth rate of 4.7 per cent from 2011 to 2015, with projected growth of 3.7 per cent for 2016 to 2020. New product launches tend to feature raw and

organic honey, along with domestic specialty varieties such as Longan and wildflower. Canadian honey is also in demand abroad, with more than 40 per cent of annual production exported to other countries, mainly the U.S. and Japan.

“We’re seeing an overall shift among Canadians, away from granulated white sugars toward the use of more natural sweeteners like honey,” says Andrew Foust, general manager at McCormick, parent company of Billy Bee. He points to a 2016 Mintel study showing that women under 45 and mothers of children younger than 18 at home use more honey than other sugars in cooking and baking. “This may reflect young consumers’ preference for more natural, less processed foods. So while we produce our all-natural honey for the wider Canadian market, we’ve recently been focusing on young families with children under 18, millennials and health-conscious consumers.” To respond to the needs of these consumers, Billy Bee introduced an organic honey in 2017, as well as a raw honey (raw honey is perceived by some as healthier) that has not undergone the pasteurization process many honey products do to slow granulation and eliminate fermentation risk.

Smaller businesses are also capitalizing on honey’s reviving appeal. Based in Saskatoon, Tu-Bees is a 10-year-old venture specializing in squeezable tubes of all-natural creamed honey made from southern Saskatchewan alfalfa, canola and clover, with added natural flavours such as Saskatoon berry, cinnamon, coconut and maple. According to marketing and sales rep Gaye Sheppard, it was her then 12-year-old daughter Nikki who first suggested the product idea when she noticed her mother fighting to squeeze the last spoonful of honey out of a plastic container. Why hadn’t anyone ever put honey in tubes like toothpaste tubes, she asked, “so you can just squish it out?”

The soft laminate tubes Sheppard chose are compact, shatterproof and portable so they can be carried in a purse or bag, and kids can take them to school to squeeze honey onto a sandwich.  Also available in tub and jar formats, Tu-Bees honey is sold online, and at Federated Co-operatives and specialty stores in Western Canada. Sheppard says demand for her product is part of the trend — driven by youth — to choose more local, natural, gluten-free food.

Toronto’s Medrar Holding Company sells premium Sidr honey, gathered exclusively from the nectar of Sidr trees that grow wild in the mountainous Hadramout region of the Wadi Do’an  Valley in Yemen. Praised in the Koran, Sidr honey is known for its distinctive buttery taste, its thickness and its reputed health benefits, including its efficacy — supported by several research studies — as an antibacterial, anti-inflammatory and analgesic. Harvested only twice a year, and transported thousands of miles out of war-torn Yemen, it’s also known as the world’s most expensive honey, with prices ranging from $70 for 250 g to $320 for one kilogram, says Medrar director Husam Al-Raimi. While the expense makes it impractical to use in processed products, small quantities can be added to coffee and tea or ingested for medicinal purposes. So far, demand for Sidr honey in Canada has come mostly from consumers of Middle Eastern or Asian origin who know its reputation and are willing to pay, Al-Raimi notes. But the goal is to move beyond online orders and secure a foothold in specialty grocery stores.

Not surprisingly, fraud can be a problem with premium honeys. There have been instances of cheaper or adulterated products being sold under the Sidr name, but since no certification process has yet been developed, companies like Medrar must rely on the relationships they build with their suppliers. There’s also widespread fraud with Manuka, a sought-after honey from the Manuka tree in New Zealand that boasts culinary and health attributes. David Noll of import firm Pacific Resources International says that numerous brands have capitalized on Manuka’s popularity by offering lower-price knock-offs and making “authenticity claims on their labels that fall well short of New Zealand’s strict industry guidelines.” He recommends that consumers only buy products that have gone through rigorous testing in independent labs  certified by the Unique Manuka Factor Honey Association.

But problems aren’t limited to exotic monoflorals, says Kevin Nixon, chair of the Canadian Honey Council. For example, Canada lacks the equipment used in the EU to test the authenticity of different honeys. In addition, the lightness and mildness of Canadian honey makes it ideal for blending, prompting some packers to cut it with cheaper imports. These honeys are still labelled as Canada No. 1 White because, having been bottled here, they meet the current rules for labelling a food as a product of Canada. “Producers want Canadian honey more clearly identified and consumers want to support Canadian,” Nixon notes, adding that changes to honey labelling and grading systems are under consideration as part of revisions to the Safe Food for Canadians Act.

Processors which use honey to make items like snack bars may be tempted to buy cheaper varieties from Southeast Asia, “but they don’t have the safety, traceability and biosecurity programs we do here,” he says. These safeguards include the Canadian Food Inspection Agency’s biosecurity standard, and a voluntary traceability program known as CBISQT (Canadian Bee Industry Safety Quality Traceability) developed by the industry with federal funding to guide safe practices for honey production and on-farm processing.

Periodic struggles with diseases such as verroa mite continue to be a challenge for the honey industry, as do winter losses and the changes in habitat resulting from the disappearance of weeds, shelter belts and hedgerows that provide more abundant pollen for bees. However, Nixon points out that industry stakeholders are putting solutions in place, increasing awareness of the role of bees in pollinating food crops, and promoting a return to pollinator-friendly habitats.

Overall, honey continues to have a positive image with consumers. As people rediscover the uses and benefits of the sweetener, the industry has an excellent opportunity to raise its profile. “There’s lots of talk about antioxidants in some of the monoflorals, but all honey has some of those properties,” notes Nixon. “Canada makes some of the best honey in the world — we can have confidence in a great, healthy product.”