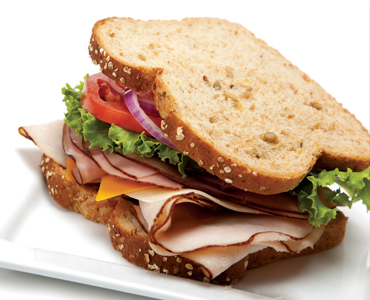 As the star of many holiday feasts, turkey is a quintessential favourite in North American food culture. Originally known by the Aztec word huexoloti, turkeys are indigenous to the Americas, and according to paleontologists have likely been here for about 11 million years.

The name turkey dates back to 15th century Europe when it was first attached to a much skinnier edible bird, the guineafowl of Africa, which made its way to Europe by way of Turkish merchant ships and became widely known as the Turkey bird. When the much plumper New World bird (the huexoloti) eventuallymade its way to Europe via Spanish explorers, it adopted the turkey moniker as it became popularized.

As a protein with a low-fat content and mild flavour, turkey is a growing part of the Canadian diet. In fact, Canadians now

consume more than 10 million turkeys a year. Because of the need for convenience, demand for processed and ready-to-eat meat products is also expected to grow. We recently put four brands of packaged sliced turkey to the test to find out whether all packaged turkey slices truly flock together.

We recruited 50 females between the ages of 25 and 54 from the Greater Toronto Area who are the primary grocery shopper in the household and who are regular consumers of packaged sliced turkey. Each participant received a slice of each of the four brands, and were asked a series of detailed hedonic and “just about right” questions regarding the appearance, flavour and textural profiles of the turkey.

A feather in the cap

The flavour profile of this front-runner was described as “delicious,” smokier than the others, with just the right amount of saltiness and an unmatched “naturalness.” It also outperformed the competitors due to its thicker texture and appetizing appearance.

In contrast, one brand dismally anchored the other end of the performance spectrum with some very unappealing qualities. This turkey slice barely achieved a mean score of five (out of nine) on many important hedonic attributes, including flavour, texture and appearance. They were much too salty, with hardly any smoky notes, their texture was much too thin, wet and floppy, and their very light colour was a big turn-off. It came as no surprise that this underachieving brand had the lowest weight per slice and the highest declared sodium levels.

Among our participants, the top stated features driving their purchase decisions were “no preservatives,” “natural ingredients,” and the “expiry date.” It may seem counterintuitive that consumers look for packaged foods that last the longest, while wanting them to be free of any ingredients that actually help to achieve this goal, but we’ve heard this message before. Consumers want to be told what they’re eating is good for them, while desiring the convenience and good value that is sometimes at odds with that objective.

Among the sliced turkey brands in our test, some called out claims of natural or allergen free, while others focused on the absence of nitrates or gluten. Consumers respond to these reassurances and positive messaging, but they’re also looking to satisfy their needs for convenience, value, and — above everything else — a taste they love. Our test highlighted one premium brand that achieved a gold standard performance for its sensory profile, and it revealed one value brand that fell below all sensory standards with very few redeeming qualities, a sign that the company has made big trade-offs in quality in order to achieve its value positioning.

While birds of a feather may flock together, this flock of turkey slices proved to have great variation in the quality of the product, revealing both a golden goose and, well, a big turkey.

For questions about this research, or how you can leverage consumer taste buds in your business, contact Dan Scholes at info@contracttesting.com, or (905) 456-0783.