The softer, sweeter side of fresh garlic 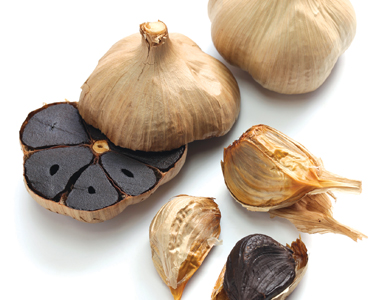 Black garlic, you minx, you are difficult to pin down. Are you fermented? Are you a superfood? Are you an ancient Asian delicacy, or a modern creation? There’s no shortage of stories out there on all sorts of details, making it tricky to sift out the truth.

Even Al Picketts, farmer and owner of Eureka Garlic in PEI — and one of Canada’s garlic gurus — finds it hard to say how long black garlic has been around. “Depending on what you read, it could be 30 years to 300 years to 3,000 years,” he says.

One thing is certain, those who make black garlic and those who use it can’t say enough about the taste.

Contrary to many media reports, black garlic is not fermented. “You’re actually cooking garlic at a really low temperature and high humidity so that it doesn’t dry out,” says Jonny Hunter, a U.S.-based chef and co-founder of Underground Food Collective in Madison, Wis. The process can take anywhere from 10 to 40 days.

Brian Han, operating manager at Hayward, Calif.-based Black Garlic Inc., says the company, which is credited with introducing black garlic to North America in 2008, uses a patented machine created by owner Scott Kim. In the mid-2000s, Kim was in Korea studying ginseng and saw a machine turning raw ginseng into red ginseng, a much more palatable version. Han describes it as fast-paced aging. “[Kim] figured why don’t we look into garlic,” says Han. “Raw garlic can be bitter and spicy. [Kim] thought he could turn it into a more consumable product.”

Picketts fashioned a refrigerator into a specialized oven to make his black garlic, which takes about 23 days. He sells the bulbs across Canada. But if you try to make black garlic in a conventional oven, says Picketts, “you’re only going to have ashes before you’re done.”

Like many people, Stuart Kirton, culinary instructor for Continuing Education at the Southern Alberta Institute of Technology in Calgary, says he uses a rice cooker to make black garlic. At the lowest setting it takes about two weeks.

Picketts, Hunter, Han and Kirton talk about the concentration of antioxidants in black garlic and how it’s rich in amino acids. It’s thought to help prevent cancer, but they all prefer not to make any claims.

How do we eat it?

According to Kirton, black garlic tastes like tamarind or molasses, but not as sweet. Picketts says it’s like “balsamic vinegar, licorice, chocolate, prunes, dates — all rolled together. One thing it doesn’t taste like is garlic.”

Hunter also notes that the process removes the pungency of fresh garlic, so “What you have is a really delicious carmelization…You get a rich savourysweet ingredient.” And black garlic won’t leave you with garlic breath.

Despite its reputation, Han laughs when asked how black garlic can be used. “Our typical answer is, ‘well, you tell us.’” It’s no surprise that he may be stumped for an answer. Black garlic can’t be used instead of fresh garlic in recipes. “It’s a completely different flavour profile,” says Kirton. “It would be like adding tamarind to your carbonara, or dates to your Caesar salad.”

But as an ingredient, adds Kirton, it is excellent. He’s used it in sauces with lamb and game meats; he’s made black garlic vichyssoise for a roasted cauliflower vegetarian entrée; and he’s also glazed kohlrabi with it. Hunter says one of his popular dishes is fried mushrooms with black garlic. He’s also made black garlic macarons and ice cream. Black garlic has also been used in mayonnaise, cream cheese, goat cheese, salami, ketchup and beer.