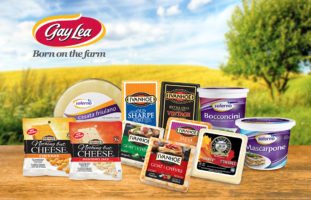 Gay Lea Foods is an award-winning artisan cheese maker, producing a wide variety of cheeses for retail and foodservice under current cheese brands, Salerno and Ivanhoe. According to a Gay Lea press release, the addition of Black River Cheese, with its strong roots in agriculture-rich eastern Ontario, will build on Gay Lea Foods’ existing cheese operations in Hamilton and Madoc, Ont.

“Gay Lea Foods is committed to growing the market for Canadian dairy and strengthening dairy farmers’ ability to secure markets for our milk. We are pleased to welcome the Black River Cheese Company into our dairy co-operative as part of our continued support for the Canadian dairy industry and Ontario dairy farmers,” says Steve Dolson, Gay Lea’s Chair of the Board.

The press release also states that as the new owner, Gay Lea Foods welcomes old and new patrons to the Black River Cheese store, which will remain open as part of the continued commitment to the local community and thriving agri-food sector in Prince Edward County, Ont. Retail and foodservice customers will also continue to be served from the Prince Edward County operations.