For the love of cheese 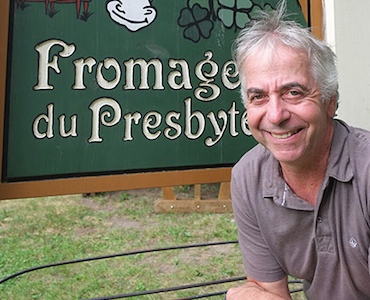 You’d think someone who owns a Catholic church and its presbytery in the heart of a small Quebec village would be well versed on such capital vices as the seven deadly sins.

But to hear Jean Morin tell it, over indulging in the specialty cheeses his family business produces in the buildings’ hallowed halls is downright heavenly. “Gluttony isn’t a sin when our cheeses are involved,” quips Morin, “it’s a virtue.”

Since 2005, Morin and his family have been making award-winning artisanal cheeses in the old presbytery in Sainte-Élizabeth de Warwick, a 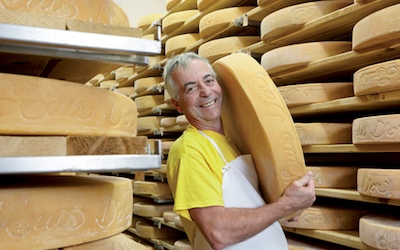 picturesque rural community in the heart of the farm-rich Centre du Québec region. Located across the street from the Morin family’s dairy farm, which supplies the operation with fresh organic milk, the presbytery plant’s nine employees produce some 60,000 tons of cheese a year.

Most of that production is devoted to the half-dozen cheeses that Jean Morin has developed over the past decade. Sold in grocery and specialty food stores across Quebec, they have earned top honours at many major cheese festivals.

The company’s newest cheese La Laliberté, a triple-cream cheese with a mushroom flavour that is made from pasteurized cow milk, was named Grand Champion at the 2015 Canadian Cheese Grand Prix. Other perennial company award winners are the Bleu d’Élizabeth, a semi-soft cheese made with thermized milk, and the Louis d’Or, winner of four different categories at the Canadian Cheese Grand Prix over the past two years.

“Louis d’Or is our biggest seller,” says Morin about the nutty-tasting, raw cow milk cheese he developed a decade ago. Produced in 40-kg rounds and ripened nine months, it takes its name from the Morin’s fourth-generation farm.

Jean Morin and his brother Dominic converted the dairy operation into an organic one 20 years ago. That conversion came on the heels of a cheese-tasting trip that Jean Morin took to France. “That trip really fired me up (and) gave me an idea on how we could add value to our milk,” recalls Morin, who studied the art of cheese making at schools in Quebec and Europe. “I’m a farmer in my soul, but I’m passionate about cheese.”

After developing his first cheese – Le Champayeur, a soft cheese that features cream, fresh butter and mushroom flavours – Morin put together a unique business plan that also addressed a crying need to find a new vocation for the village presbytery.

“It had been on sale for years and was falling into disrepair,” says Morin. “Our plan was to renovate and expand it into a production facility 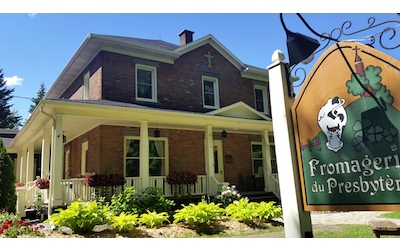 that would make great cheeses from our organic milk (and) help breathe some life back into the community.”

Fuelled with milk from the roughly 65 lactating Holstein and Jersey cows in their 140-head herd, which is managed by Dominic and one of Jean’s three grown children who work in the business, the cheese plant in the presbytery (a unique venue that gave the company its name) has been a success from the get go.

In addition to their high-end artisanal cheeses, the Morins also produce three sorts of cheeses on a weekly basis from April through September. The cheeses are ready on Friday afternoons, and the weekly tastings are now a major gastronomic event that attracts hundreds of cheese lovers and visitors to the village.

“We call them Festive Fridays,” says Morin. “People show up with folding chairs, and they sit around the lawn of the presbytery waiting for the day’s cheeses to come out of the vats.”

The tasting involves three courses, one for each of the steps needed to make Cheddar cheese. The first is whey cheese, (petit lait in French), then unsalted cheese blocks (fromage en fesse), and finally cheese curds (fromage en grains). “Everyone gets a baguette fresh from our bread oven,” adds Morin. “People sit around chatting with their fellow cheese lovers and our artisan cheese makers. Sometimes there’s music and people dance. It’s always a fun night in the village.”

According to Morin, the event began in response to customer demand. “People were always asking us for curds, so we decided to go along with that,” he says. “We picked Friday because Saturday is our day off. We’ve never advertised it, it’s just grown through word of mouth and some news stories. It’s become hugely popular. We’ve had as many as 1,000 people, many of them across Quebec, Ontario and the Maritimes.”

His family, adds Morin, is proud of both their business and Festive Fridays, which even their mother, who still lives in the original family home across the street from the presbytery, sometimes participates in.

The Morin’s company also recently added the village church to their list of assets. “We bought it from the municipality for one dollar,” says Morin. According to the business plan behind that purchase, the building will be renovated in order to age cheese from the presbytery plant next door. A small 50-seat chapel will also be built inside the church so that its religious vocation can continue.

“People are extremely happy with the plan,” notes Morin. “Everyone was worried about what was going to happen with the building (and) the community was stuck with paying for maintenance and the heat and snow removal. This way we assume all those costs and the church will be open for people all year long. It’s a win-win for us and for our community.”

The addition of the church will also give the company the extra room it needs to continue developing high-end artisanal cheeses. “Our plan and focus now is to continue working to improve our operations and products,” explains Morin.

As well as increasing the company’s herd to over 100 lactating cows, Morin says production will be increased, as will its lineup of high-end cheeses. “We’re also working to develop and improve our milk and cheeses,” he says. “For me, winning prizes is both a challenge for our company and recognition for the quality of our products. But the most satisfying thing about business is that it’s become a real source of pride for our family and for our community. It’s the perfect example of sustainable development.”