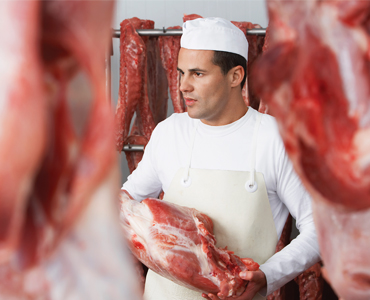 Mark Chambers describes the labour situation in the meat industry with one word: critical.

Right now, across the country, there are around 1,000 positions available in meat-packing plants alone, says Chambers, senior production manager at Sunterra Farms, which owns a 3,000-sow operation in Acme, Alta. and a 130-employee processing plant in Trochu.

“We just can’t fill them,” he says. “We’re having a real hard time filling those positions with Canadians because Canadians don’t want to work in meat plants.”

The meat industry is the largest component of Canada’s food-processing sector, accounting for 65,000 jobs, $24 billion in sales and $5.6 billion in exports. “Unfortunately, the current shortage of labour in Canadian meat packing and processing establishments is critical, chronic and deteriorating,” says Ron Davidson, director of International Trade, Government and Media Relations at the Canadian Meat Council.

How the industry got to this point is a combination of factors. First, rural populations are steadily declining, as more and

more people relocate to urban centres. On top of that, it’s hard to get people to relocate to small towns to do this type of work. “We’re educating our own population to grow up and do bigger and better things,” says Chambers. “We’re not bringing our children up to work in meat plants.”

Further compounding the issue is that more than a decade ago, the Canadian government decided to give preference to highly skilled immigrants with university and college degrees, which further reduced the available labour pool for the meat sector. “That really closed the taps on what had been an historical way for the industry to get access to workers,” says Davidson.

And, let’s face it: jobs in slaughterhouses and processing plants are tough. “Our industry is a very arduous industry for people – a lot of the jobs are physically demanding,” says Rich Vesta, president and CEO of Harmony Beef, which is opening a new plant northeast of Calgary this fall. Vesta says he doesn’t anticipate problems filling positions, partly because of the plant’s proximity to the city. But he has a great deal of empathy for workers. “I learned how to cut meat when I was 14 years old and I understand almost every one of the tasks in the plant, and I understand how difficult it is,” says Vesta.

To help fill gaps in the workforce, the industry has for years been relying on Canada’s temporary foreign worker (TFW) program, which allows employers to hire workers from abroad to fill positions temporarily when qualified Canadians aren’t available. The program allows some workers to transition to permanent residency through programs such as the Provincial Nominee Program.

Permanent residency for workers was always the goal for employers in the meat industry, since jobs in the sector aren’t temporary. “[The temporary foreign workers program] was the only way to get workers, so we took the proverbial round hole and tried to put in a square peg,” says Davidson. “In combination with the Provincial Nominee Program, we made it work for the industry and for Canada. But that’s been interrupted now.”

Davidson is referring to sweeping reforms the federal government made to the TFW program in 2014. The government was prompted to take action after a number of abuses came to light, primarily in the fast-food and financial sectors. RBC, for instance, was accused of axing Canadian staff and replacing them with foreign workers, which caused a public uproar.

Among the reforms, most concerning to the meat industry is a cap on the number of low-wage temporary foreign workers employers can hire per work site. The cap is gradually being phased in: it started with 30 per cent last year and will be further reduced to 20 per cent as of July 1, 2015 and 10 per cent by July 1, 2016.

For Chambers, the situation is worrisome, as workers who leave can’t be replaced. “As it stands today, we’ve got 20 empty spots at our meat plant in Trochu, which we can’t fill because we’re at the cap,” he says. Without a full labour force, plants like Sunterra can’t maximize the efficiency of their operations. Chambers says if that happens, the company will consider moving part of the operation to Calgary. And if Sunterra can’t do that, it will end up shipping work to a U.S. processing plant.

That’s exactly what’s been happening at other companies. According to the Canadian Meat Council, during the first 11 months of 2014, some 1.1 million live cattle and 4.4 million live pigs were shipped out of Canada to the United States. Chambers says having to export livestock for processing “makes no sense for our trade agenda.”

Indeed, new export opportunities have recently opened up with the Canada-Korea Free Trade Agreement (CKFTA) and the Canada-Europe Comprehensive Economic and Trade Agreement (CETA), as well as the Trans-Pacific Partnership, which is currently in negotiations. “The Government of Canada has done a great job of getting these export opportunities, but we’re going to have a challenge to fill them,” says Chambers.

Not being able to operate at normal capacity cuts into profits on the value-added side of the business across the board. “The chance to make a profit comes from doing the retail-ready or foodservice cuts,” explains Davidson. “But because you’ve got to staff the front end, you don’t have employees to do this.”

So what are some solutions to the meat sector’s labour woes? Since announcing the changes to the TFP program, the government has been stressing a “Canada first” hiring policy. Employers are encouraged to offer higher wages, invest in training and focus on underrepresented groups, such as aboriginals, new immigrants and youth.

But those in the industry are insistent they’re doing that already. “We attend job fairs across Canada, we advertise, we assist with relocation costs,” says Chambers. “Some companies work with new Canadians who have landed here as permanent residents, such as refugees. It’s a small component that helps complement the staff that you have, but it doesn’t fix the void.” As for wages, most companies offer a wage of between $12 and $17 per hour, training programs and full benefits. But the problem persists.

“When you go to a job fair in the East Coast where they’ve got high levels of unemployment and no one is interested in moving out West to work in a meat plant, what do you do?” asks Chambers.

The meat industry has an answer to that question: create an immigration program that recognizes that there just aren’t enough Canadians available or willing to take jobs in certain sectors of the economy.

“The whole premise of temporary and foreign workers does nothing for Canadian agriculture,” says Ryder Lee, manager of Federal Provincial Relations at the Canadian Cattlemen’s Association. “We need permanent workforce solutions and generally that means we need more Canadian workers. And we’re not making them fast enough in Canada.”

So, industry groups have put forward a workforce plan that focuses on “pathways to permanency,” not just bringing people in on a work permit. Even before changes to TFW program were announced, the agricultural industry was working on solutions to the labour challenge across the entire agriculture and agri-food sector, introducing the Agriculture and Agri-Food Industry National Workforce Action Plan in 2013. The initiative is spearheaded by the Canadian Agricultural Human Resource Council.

For the meat industry specifically, other solutions are proposed, such as allowing meat packers and processors to qualify for Express Entry, which lets employers fast-track applications for skilled workers seeking permanent residency. “But the big game is trying to get the government to understand that butchers and meat cutters is an area where the Canadian economy just doesn’t have enough supply domestically,” says Davidson. “For the rural economy to survive, we have to be able to bring people from abroad who are going to do this work.”