With determination, the Plasse family has developed Alipro-Mistral Ingredients Inc. into a food industry leader 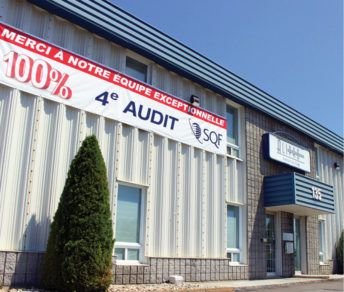 Quebec food ingredients producer Francine Plasse said keeping abreast of customer needs and industry innovations is as vital to her business as the location is to retail operators.

“You have to always be alert to the needs of your customers and stay informed about new trends,” said Francine Plasse, vice president of Alipro-Mistral Ingredients Inc., a Plasse family-owned Quebec company that is a leader in the development and manufacturing of custom ingredients for the food industries in Canada and the United States.

“And you need to be able to adapt quickly to changing realities.”

It is hard to argue with success. Company president Richard Plasse and two of his daughters — Francine and Mireille — founded the company in 1997 with 5,000 square feet of rented space in the off-island Montreal suburb of Delson. The company has grown from a start-up with less than $1 million from mostly local sales in its first year of operation into a major player in the Canadian food ingredients niche with blue-chip customers and sales approaching the $20-million mark.

At the same time, the food industry’s use of the company’s core products of custom-made fillings, icings, jellies and glazes have expanded from a few Quebec-based products to include many iconic brands in the bakery, cookie, dairy and confectionery sectors.

Those products are incorporated in everything from cookies and fruit bars, snack and decorated cakes to viennoiseries and pastries, donuts, ice cream and chocolate bars, are sold in major and regional grocery store chains, bakeries and restaurants in North and South America as well as Europe.

For Francine, her family’s overarching commitment to quality and innovation has helped to fuel the company’s growth in terms of market share, client base and customer satisfaction.

Between 2010 and 2015, for example, the company invested more than $2 million in its Delson facility, which now takes up 30,000 square feet in the same building and is owned by the Plasse family.

Nearly half of that money, which was obtained through loans from both federal and provincial development banks, was spent on modernizing the ceilings, floors and ventilation system to meet both Safe Quality Food and Global Food Safety Initiative standards.

The majority of that investment was used to both modernize and expand Alipro’s production facilities to ensure that food is produced, processed and handled according to the highest standards through rigorous and documented controls in every step of the production chain.

The upgrades included the replacement of kettles, the creation of a state-of-the-art lab for product development and the building of six platforms dedicated to production.

Those platforms include three for fillings and one each for icing, caramel and packaging for icing and filling.

“The quality of our system has really put us into the major leagues,” said Francine. “We have always been very consistent in regards to quality and continuous process improvement. We don’t take half measures on any aspect of production. We always ensure that everything is done to perfection.”

Alipro, she noted, received a 100 per cent score in the 2019 quality audit. “We’re extremely proud of that,” said Francine. “It’s very rare in our business for a company to achieve a perfect score.”

In many ways, Alipro’s commercial success is both a culmination and the crowning touch to the Plasse family’s dogged determination to be successful entrepreneurs in the Quebec food industry.

That story began more than 50 years ago when Richard landed a job on the production line of Lallemand, a century-old, Montreal-based company that began as a local bakery and now specializes in the development, production and marketing of yeasts and bacteria products that are sold around the world.

Richard later left to work at Rose & Laflamme, a commercial bakery in La Prairie, which is now owned by George Weston where he assumed positions, including team leader, supervisor, production manager and general manager.

“Richard was a quick learner and he moved up the ladder very quickly,” said Francine. “But his ultimate dream was to start his own food company.”

That dream was realized in 1988 with the opening of Aliments Plasse, a partnership between Richard and three of his six children, including Francine and two brothers. The business was based in the historic town of Chateauguay, where it developed, produced and sold mostly fillings and icings for a few customers that Richard knew from his career in the Quebec baking industry.

Though personal issues led to the eventual sale of Aliments Plasse, some family members made a quick return to the food industry with the founding of Alipro-Mistral Ingredients Inc.

“The company started small but grew quickly,” said Francine, a university graduate who left her job as a purchasing manager to start Alipro-Mistral Ingredients Inc. with Richard and sister Mireille.

With Richard as president and principal salesperson and Francine and Mireille respectively in charge of finance and administration/operations, the fledgling firm began shipping orders in 1997.

“We started very small, providing ingredients for just a few products like pie fillings and beverages,” said Francine. “But things picked up when we added big Quebec customers like Sobeys and Laiterie de Coaticook.”

Those companies, she added, have remained loyal customers, with Sobeys buying a variety of pastry fillings and icings for in-store bakeries at Quebec IGA stores and Coaticook ordering ingredients for its many dairy-based products.

“Our market is very specialized and we work very closely with our clients to develop custom recipes that meet their needs,” explained Francine. “I think the best evidence that shows we do that very well is that our customers are extremely loyal.”

According to Francine, in addition to filling repeat orders, Alipro can and does develop and create new formulations that it proposes to clients.

“But normally it is customers who come to us with new products they are developing and they give us the parameters,” she said.

The development of products, she added, for everything from clean label to non-GMO and non-hydrogenated oils can take anywhere from a few months to a year.

Much of the research and development work on recipes, flavour profile, colour and even oven performance is still done by Richard, now 78. After much testing at Alipro’s facility, samples are sent back to clients for further testing in their products.

“When we finally arrive at the final product we do a batch trial run, during which any minor adjustments needed can be made,” said Francine. “It takes a lot of organization and planning because of the number of different products and their different stages of development.”

Increased regulations in the food industry convinced the Plasse’s that it was time to invest heavily to reach the highest production certification levels.

In addition to the $2 million quality control upgrades to the company’s production facilities, Francine credits the arrival of Normand Nowlan as sales manager in 2012 as a major milestone in the evolution of the business.

“Normand is a very determined and energetic person,” she said. “His hiring gave us a big boost. And it allowed Richard to focus more on R&D.”

Francine said the company has enjoyed steady volume growth with both its existing client base as well as new clients, with roughly 55 per cent of sales in Quebec, 30 per cent in Ontario and 15 per cent in the U.S.

The company focuses on large industrial clients, and orders are generally in multiple batch loads or full truck loads. At least one customer receives a truckload of ingredients every week.

“Our focus now is on industrial clients,” said Francine. “Our products are all customized to a clients’ requirements, made to order and shipped. We don’t keep a lot of inventory on hand.”

Plasse said fruit bar fillings are now one of her company’s major lines. She said the constant development of new or reformulated products based on market trends offers many opportunities for future growth.

Francine added that Alipro’s production capacity could handle double the volume of current company sales. “We’ve got room to grow, and I’m confident we will,” she said.

In addition to having to keep up with food industry innovations and the sometimes complex ingredient needs and desires of customers, Francine said keeping up with and adapting to ever-changing food regulatory requirements is a challenge, as is the rising cost of many ingredients needed to make client recipes.

“Like in any business there is always a mix of opportunities and challenges,” said Francine. “But the key in our business is to work closely with our suppliers and clients and to make sure we always make the best possible products.”