Sea asparagus, also known as Salicornia or samphire, may not be a household name yet – but this wild vegetable is well on its way to becoming more popular in Canada 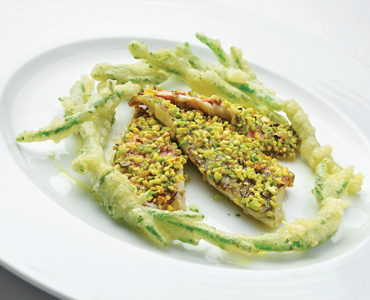 Here in Canada, it’s typically called Salicornia or sea asparagus – although East Coasters may call it samphire greens or crow’s foot greens – while the British commonly know it simply as samphire. This green and salty indigenous vegetable isn’t exactly ubiquitous in Canadian kitchens yet, but according to Jonathan Forbes, owner of Forbes Wild Foods in Toronto, it is well on its way to becoming much better known across the country.

“It will become more popular,” says Forbes. “When I first took it to a farmer’s market maybe 10 or 15 years ago, not that

many people knew what it was, so a lot of people sampled it. Once people try it, they really like it. Now there are a lot of people asking when it’s coming. Every year, people are wanting it more and more.”

In Canada in particular, it’s found on both the east and west coasts. “It’s protected in certain parts of Canada, particularly on the West Coast. And we get it both from Vancouver Island and from Haida Gwaii,” says Forbes. “On the East Coast we get it from down the southern part of Nova Scotia. And we’ve had it from New Brunswick, but it just depends on how fat and succulent the pieces are.”

Forbes says that here in Canada, sea asparagus is typically in season during spring and summer – “but that’s for Canadian fresh, so that’s not to say that you couldn’t get it from other countries later in the year.” Forbes says he commonly sells it to people directly at farmer’s markets, “and we do sell some through stores, and we sell to restaurants as well.”

How are people eating it?

“People will either eat it raw, or put it in salads, use it as a side dish for fish, or any number of things,” says Forbes. “Some people will even blend it up and put it in smoothies and health drinks.”

Last year, both the Toronto Star and Globe and Mail published articles extolling the virtues of sea asparagus, both of which included recipes and ideas on how to incorporate the salty wild vegetable into your cooking. Suggestions from these articles included eating it raw, pickled, as a side dish or garnish for a fish dish, tossed in a salad, added into a pasta dish, served underneath shucked oysters, or even deep-fried in tempura batter.

What are its benefits?

From a nutritional standpoint, Salicornia is rich in vitamins and minerals, including vitamin C, vitamin A, iron, calcium and more; and like most vegetables, it’s high in dietary fibre. From a sustainability standpoint, the fact that it grows in saltwater areas where many other crops can’t survive is a point of interest for many agricultural scientists globally – salt-tolerant plants are currently being studied as important for the future as sea levels rise around the world.

As the local food movement gains steam, Forbes is quick to point out that sea asparagus is abundantly available right here in our own country – a fact that many Canadians simply aren’t aware of. And it’s far from being the only wild indigenous vegetable that could use a little more publicity. “That’s the thing about a lot of the wild foods: they’re available in many different areas, and people just don’t know what they are. Canadians know less about our indigenous wild foods than they do about farm foods,” he says. “I think [Salicornia is] just one of many indigenous foods that a lot of people haven’t discovered – there are hundreds!”