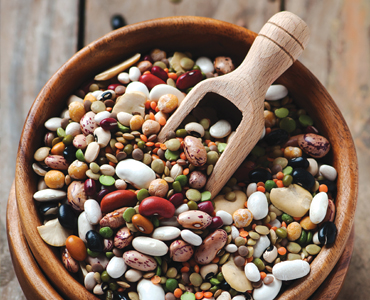 There’s a lot more to pulses than baked beans and split pea soup. With 2016 named the International Year of Pulses, the spotlight shines on a food crop largely ignored by food processors in North America. Thanks to new research and development, pulses have revealed themselves to be versatile ingredients capable of much more than soups or stews.

The term “pulse” refers only to the dried seed of the legume family. The United Nations Food and Agriculture Organization (FAO) recognizes 11 types of pulses, with the most common varieties being dry beans, dry peas, chickpeas and lentils.

While pulses have a long history of human and animal consumption going back at least 10,000 years and are among the

most extensively used foods in the world, North Americans are only starting to appreciate the benefits of this food crop.

Margaret Hughes of Best Cooking Pulses (BCP) says when her grandfather established the company in 1936, pulses were a niche market. “Pulses were exported and sold to the U.K. canning industry, as well as into the domestic market, mainly Quebec, for French Canadian pea soup,” she says. Today the family owned agri-food business is a leader in the international pulse trade. In June BCP was named 2016 Food Company of the Year by Food & Beverage Manitoba.

The main pulse crops in Canada are dry peas, lentils, dry beans, chickpeas and faba beans. Canada is the world’s largest producer and exporter of lentils and dry peas to countries such as India, Turkey, Egypt, China and Bangladesh. In fact, in 2015 we exported six million tonnes of pulses worth nearly $4.2 billion to more than 150 markets around the globe, according to Pulse Canada, a national industry association.

While a large portion of pulses produced in Canada are intended for exports, the last decade has seen a focus on enhancing secondary processing, thanks to organizations such as the Canadian International Grains Institute, or Cigi. Ten years ago the non-profit launched a pulse-processing and specialty milling facility and a project that assessed pulse quality with developing methods for dehulling and splitting pulses effectively and efficiently.

This early work laid the foundation for investigating milling methods and how they affect the functionality of pulse flours as ingredients in food product applications such as baked goods, Asian noodles, extruded snacks and batter-coated products.

Jackie Green, project manager at Quadra Ingredients, explains that not all pulses are ground or milled into flour using the same techniques. “If you have a stone-ground flour, a whole wheat flour, or a white flour they are not going to function the same,” she says. “Pulses are the same.”

Cigi’s latest project, which received a funding boost of over $950,00 from the federal government last year, looks at the nutrition of pulses how it translates to applications in food. Heather Maskus, project manager, Pulse Flour Milling and Food Applications at Cigi, says “the challenge of the project will be to maximize the nutritional benefits of pulse flours while maintaining functional quality of the ingredients.”

Pulses are more than a great alternative protein source. They offer a significant source of vitamins and minerals, such as iron, zinc, folate and magnesium. In addition, the phytochemicals, saponins, and tannins found in pulses possess antioxidant and anti-carcinogenic effects, indicating that pulses may have significant anti-cancer effects.

Pulses are also high in fibre and have a low glycemic index, making them particularly beneficial to people with diabetes by assisting in maintaining healthy blood glucose and insulin levels.

In fact, fibre is one of the best reasons for using pulses, says Chef Sean Audet of Red River College’s culinary research program. “Fibre gives them a good thickening characteristic.” Furthermore, Audet says he and his students have found a number of ways to manipulate pulse products and make them work more effectively in various applications. “I’m proud to say that we’ve developed applications for pulse products that range from simple pulse flour substitutions in baked goods to sauce work to completely new techniques we didn’t even know were possible,” he says.

For example, working with Best Cooking Pulses and the support of the Natural Sciences and Engineering Research Council of Canada to look at bean flours as an egg substitute in baked goods, Audet says they were able to develop several recipes eliminating eggs, including a completely vegan, nut-free, bean-flour based French macaron. “Which was actually really pretty amazing,” he says.

Students and chef instructors at Red River College have also conducted recipe development for Manitoba Pulse and Soybean Growers to demonstrate that pulses can be incorporated easily into recipes such as gluten-free crackers and cookies, perogies, flatbreads, even crème brûlée.

The versatility of pulses was recently showcased at Mission: ImPULSEible, an annual product development competition for post-secondary students. With 2016 as the International Year of Pulses, competitors were tasked with creating traditional foods products using Canadian pulses.

Fiberger is an innovative, nutritious, high fibre meat extender made from red lentils, green peas and chickpeas. Created by Caileigh Smith and Evelyn Helps of the University of Guelph, Fiberger was crowned national champion in the ninth annual competition, which took place on Feb. 22, 2016 in Vancouver.

Helps says Fiberger can be used in many different ways. “For example, adding Fiberger to patties and meatballs can reduce the amount of meat required, while adding fibre and protein to enhance the nutrition of the meal. Fiberger can also help families decrease their food costs by giving them a healthy, affordable ingredient to add to their protein dishes.”

The pair represented Canada at the Global LovePulses Product Showcase on July 19, 2016 during the Institute of Food Technologists Expo (IFT) in Chicago. Ten other countries have been invited to be a part of the Showcase which will demonstrate the versatility of pulses to the world’s leading food professionals.

Other winners at Mission: ImPULSEible included a gelato-inspired dessert made with fermented bean milk made using an assortment of pulses, and a breakfast bar containing faba bean flour, chickpea flour, and green lentils.

As consumer awareness continues to grow around the nutritional benefits of pulses, the number of products fortified with pulses will continue to expand. Already food manufacturers have added pulses or pulse products to innovative food products such as breads, cereals and baking products; pasta and sauces; meat and dairy-free alternatives; snacks; and beverages.

Pulses pose a triple threat, delivering health, nutrition and environmental benefits. With the massive global marketing effort behind International Year of Pulses, pulses are poised to be the next big food trend. Move over kale and quinoa.