According to results released from Health Canada’s Trans Fat Monitoring Program, Canada continues to make progress toward reducing the amount of trans fat in the Canadian food supply. The program found that 80 per cent of the pre-packaged foods it had selected for label review met the trans fat limit set by the Trans Fat Task Force in 2006. That limit was two per cent of the total fat content for all vegetable oils and soft, spreadable margarines, and a limit of five per cent of the total fat content for all other foods, including ingredients sold to restaurants. The foods the program sampled for this set of data include bakery products from grocery stores, such as croissants, pies, tarts, cakes, brownies and donuts; foods from restaurants serving Chinese, Thai, East Indian, Lebanese, Caribbean, Japanese and Vietnamese cuisines; donuts and muffins from popular coffee and donut shops; and pre-packaged foods from grocery stores, including cookies, crackers, instant noodles, frozen potatoes, desserts, snacks and popcorn. This is the third set of data Health Canada’s Trans Fat Monitoring Program has released. For the first two sets, Health Canada looked at those food categories that had previously contributed the highest levels of trans fats, including foods from family restaurants and popular fast food chains, as well as pre-packaged foods. The fourth and final set of monitoring data will be posted this summer. 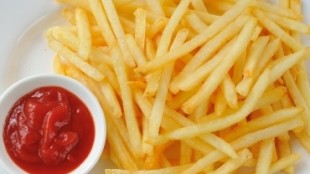