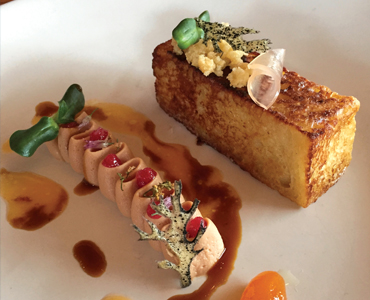 In just a few months from now Canada’s candidate for the Bocuse d’Or Competition will be competing to earn the right to be on the world stage in Lyon in January 2019.

The Canadian Culinary Federation (CCF) is pleased to announce that Trevor Ritchie, chef technologist at George Brown College, won the Canadian Bocuse d’Or National Selection Competition in April 2016 against some of the most talented chefs in the country. Ritchie now has his sights set on competing in Mexico on April 12 and 13 in the Americas Regional Bocuse d’Or qualifier. From there, five of the 12 countries competing will go on to the grand finale in Lyon, France in 2019.

Canada has a long history of competing successfully on the culinary stage, and this continued success has created a depth of knowledge and experience that is now passed onto Ritchie. There is also a team of visionary and talented chefs, mentors and sponsors who will support Ritchie on his drive to the podium in Mexico and Lyon. Under the management, leadership and vision of CCF president Simon Smotkowicz, Thomas Delannoy of Rougié Foie Gras, the advisory committee and some high-profile brand sponsors, the  Canadian team is working to establish a solid foundation to help bring together all the necessary components to ensure success.

“Le Bocuse d’Or is the most prestigious and the most difficult global cooking competition,” explains Jean-Pierre Challet, team coach. “No Canadian chef has ever brought home the gold and we only made the top five twice since 1987, not because of a lack of talent in the mastery of French cuisine but because of a lack of continuity. We feel strongly that we will make the top three in Mexico, and that the team will get a chance to demonstrate the best Canada has to offer, not only in talent but with a myriad of Canadian flavours and products.”

Founded by legendary French chef Paul Bocuse (who recently passed away at the age of 91), the Bocuse d’Or competition is the world’s most prestigious culinary competition. Held every two years in Lyon since 1987, the competition will be held at SIRHA, a professional trade show dedicated to foodservice and gastronomy. Ritchie is no stranger to fierce competition, having been a Chopped Canada champion, having represented Canada and placed first in the Hans Beuschkens Culinary Challenge, and having placed second in the world at the Angliss Culinary Cup. He was also the Bocuse d’Or Canada coach for the 2017 finals, and has worked in some of Canada’s best kitchens, including Langdon Hall, Queen’s Landing, La Société and Campagnolo.

The criteria for Mexico will require Ritchie, along with commis chef Jenna Reich, to produce dishes within five-and-a-half hours. The competition requires nine plated portions for each mandatory item of salmon and suckling pig, plus garnishes for both platters. And you can be sure they will be injecting unique aspects of Canadian cuisine in the dishes. Competitors will be judged by the tasting jury on presentation, taste, and originality/creativity, as well as by the kitchen jury for technique and waste optimization.

Platters for the food to be presented on in Mexico are being created by a team lead by visionary designer Luigi Ferrara, dean of the Centre for Arts, Design & Information Technology at George Brown College in Toronto, and director of the internationally acclaimed Institute without Boundaries. Ferrara is assisted by Sean Sina Zarabi in the design and construction of the platters.

I’m pleased to be part of this incredible team as event co-ordinator and chef advisor. Having participated in the competition representing Australia, I’m familiar with what it takes to compete at this level. There have already been a number of events to raise much needed funds for the road to Lyon, including at Campagnolo restaurant in Toronto, Apricot Tree in Mississauga, Ont., and Atelier in Ottawa. Please visit Bocuse d’Or Canada’s Facebook and Instagram accounts for upcoming fundraising events, including coming events at Cafe Belong and Cirillo’s Culinary Academy.

Bocuse d’Or Canada is part of the Canadian Culinary Federation (CCF), the national association which represents chefs across Canada. We are grateful to the sponsors — Rougié, Cacao Barry, Acadian Sturgeon and Caviar Inc., George Brown College, Powder for Texture, The Chef’s Hat Catering Company, F. Dick knives — who have signed up thus far, and look forward to including new sponsors in the Bocuse d’Or challenge for 2018/2019. The cost of competing on the world stage is staggering, so donations are welcome. For more information, visit www.bocusedorcanada.ca