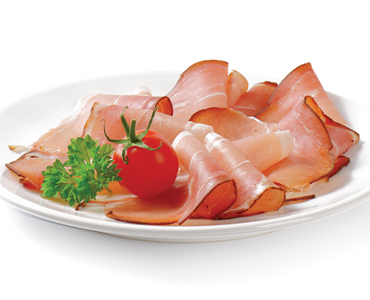 Despite many health experts steering us away from processed meat, grocery stores still offer a wide assortment of choices. Turkey is the latest darling of deli meats, while high-end Charcuterie such as prosciutto, pâté, and other European cured meats are having a renaissance in the deli section. However, our long-standing favourites of bologna, roast beef, and ham continue to own the podium in the deli counter. Sandwiches are still the number-one food option for lunches at home, and are often filled with the same familiar cold cuts we grew up with.

The processing of deli ham is quite complex — baked or smoked hams are generally injected with salt, water and phosphates

and are given a variety of labels such as honey, smoked, maple, or Black Forest, to indicate the particular flavouring that has been injected. Black Forest ham acquired its name from the Black Forest region in Southwest Germany, still the epicentre of authentic Black Forest ham production. It’s a profile we’ve come to know and love, and continues to be a lunchtime favourite. So we recently set out to explore four brands of packaged Black Forest ham to see how they stack up.

We recruited 50 females between the ages of 25 and 54 from the Greater Toronto Area who are the primary grocery shopper in the household and who are regular consumers of packaged sliced ham. They tasted and evaluated four brands of packaged Black Forest ham. They were asked a series of detailed hedonic and “just about right” questions regarding the appearance, flavour and textural profiles of the ham.

Two brands of Black Forest ham took the top prize in our contest. They both had excellent results and achieved all performance action standards for the category. While these two ham slices shared similar profiles and there were no significant differences between them, one was directionally better as a result of its slightly smokier and less salty flavour profile. In fact, this winner boasted top box purchase interest of over 40 per cent — which is definitely one high achieving ham. In addition to their winning flavour profiles, these hams outperformed their competitors for their textural profiles as well — another strong driver of “liking” in this category. These slices were thicker, firmer, with the right amount of moistness compared to their less formidable competitors.

The two brands of ham at the other end of the performance spectrum were similar for some of their unappealing qualities, such as extreme saltiness. These slices also tended to be too thin and “wilty.” But when it came to the flavour profile, one was disliked for having a very strong smoky flavour, while the other had little detection of smokiness at all. And texturally, one was much too dry, while the other tended to be too wet. So both these two packaged hams seemed to miss the mark on their sensory profiles…although not for all the same reasons.

Trees in the forest

Among our participants, the top stated features driving their purchase decisions for packaged Black Forest ham were “no preservatives,” “natural ingredients,” and the “expiry date.” It may seem counterintuitive that consumers actually look forpackaged foods that last the longest, but also want them to be free of any ingredients that actually help to achieve this goal. The message may be conflicting,but at least it’s clear to food marketers and manufacturers — consumers want to be told what they’re eating is good for them, but they also want all the convenience and good value that is sometimes at odds with the first objective. Packaged, processed food is both our friend and our foe.

The Black Forest ham brands in our test were all reasonably similar in meat protein, ingredients, and nutritional labelling. Some called out claims of gluten and lactose free, while others focused on being a good source of protein or trans fat free. Consumers respond to these reassurances and positive messaging, but they are also looking to satisfy their needs for convenience, value, and over everything else, tastes they enjoy and are familiar with. Our test revealed two brands that achieved high standards in product performance, and two that did not. Standing apart in the crowded forest of packaged foods means providing the best possible sensory experience, one which consumers will return to.