Regina, Sask. – A new report finds that Canada is the world’s top agriculture trader when compared to all other countries on a per capita basis.

The Farm Credit Canada (FCC) Ag Economics: A 2014 Look at Global Trade annual report takes the combined value of all agriculture exports and imports from each of the major agriculture trading countries and divides that number by each country’s respective population. 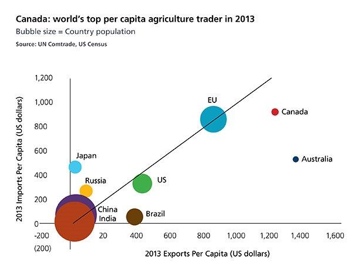 “It shows the agriculture sector is more important to Canada than all other countries, including the U.S., Australia and the EU.”

In 2013, says the report, the value of Canada’s agriculture imports and exports was more than US$2,100 per person, followed by Australia at about US$1,900 per person.

While China and India don’t rank high on the per capita agriculture trade spectrum, the significance of these emerging economies, with huge and growing populations, shouldn’t be ignored.

In fact, says Gervais, Canada appears well positioned as an important agriculture trader in the world and the expansion of trade relations will only help to sustain and build on that.

Canada’s imports are mainly driven by relatively high household incomes and a year-round demand for fresh fruits and vegetables, which is partly met by foreign exporters.

“This report confirms that agriculture is and will continue to be a major contributor to Canada’s growth and prosperity,” says Gervais.