A new report from Farm Credit Canada finds that Canadians have been willing to pay more for beef since 2011, even while per capita consumption trended down. Beef industry outlook is positive 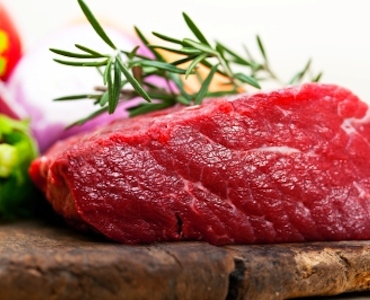 Regina, Sask. – Canadians may be consuming less beef, but a new report finds that demand for it is still strong.

The report is from Farm Credit Canada (FCC) and is called 2015 Beef Sector Report. 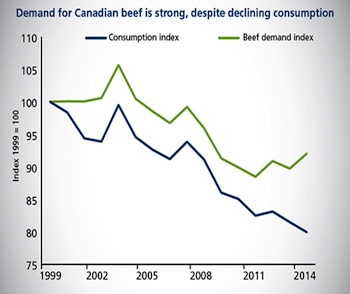 FCC’s Beef Sector Report projects growth in both global exports and beef consumption, driven primarily by Hong Kong, China and various emerging economies. In 2013, Hong Kong surpassed Mexico as the second largest importer of Canadian beef and maintained its status, second only to the U.S.
World consumption of beef is projected to grow by 12 per cent over the next 10 years, according to Organization for Economic Co-operation and Development and United Nations joint 2014 Agriculture Outlook. In 2014, Canada was the seventh largest beef exporter in the world.

In it, J.P. Gervais, the FCC’s chief Agricultural economist, explains that Canadian consumers still enjoy beef and have been willing to pay a higher price for it since 2011.

“The declining per capita consumption trend over the past decade suggests a number of factors are influencing consumer behaviour,” he says, “but it says nothing about their appetite for beef.”

The report goes onto explain the assumption that demand and consumption go hand in hand.

However, consumption is driven by market forces such as price, shifting demographics and health-related perceptions. Demand, on the other hand, is driven by the willingness of consumers to pay specific prices given their tastes, preferences and budget constraints, says Gervais.

“Despite the decline in consumption, the outlook for the Canadian beef industry is positive,” he adds. “That’s because demand for beef is expected to increase – both domestically and globally.”

Gervais explains that there are hurdles such as low cattle numbers, competition for land and labour shortages. But Canadian producers can still capitalize on the opportunities. It’s important they identify ways to grow as a world supplier.

Canada’s beef industry has taken the first step by developing a plan to position the sector as the most trusted and competitive producer of high-quality beef in the world. To read or download the plan, visit beefstrategy.com.