Whole grain cereal as good as a sports drink

Researchers at the University of Texas at Austin have found that a bowl of whole grain cereal can be as effective as popular carbohydrate-based sports drinks.

A release on the University’s site explains that a group of researchers investigated the post-exercise physiological effects of the foods.

The team studied 12 trained cyclists, eight male and four female. In contrast to many sports nutrition studies, however, the exercise protocol was designed to reflect a typical exercise session.

After a warm-up period, the subjects cycled for two hours at a comfortable work rate, rather than the more frequently seen test-to-exhaustion.

The goal, says exercise physiologist Lynne Kammer, was to compare whole grain cereal plus milk and sports drinks. The team wanted to look at their relative effects on glycogen repletion and muscle protein synthesis for the average individual.

What they found was that glycogen repletion, or the replenishment of immediate muscle fuel, was just as good after whole grain cereal consumption and that some aspects of protein synthesis were actually better.

The researchers concluded that, for amateur athletes and moderately physically active individuals who are trying to keep in shape, popping into the kitchen for a quick bowl of whole-grain cereal and skim milk may be a better move than investing in the higher-priced sports drinks.

The study was supported by the General Mills Bell Institute of Health and Nutrition. 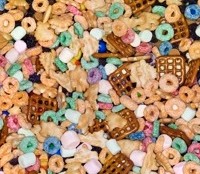 Cereal manufacturers can do more to combat obesity: study

Getting enough daily grain? Not according to survey