Cereal manufacturers can do more to combat obesity: study 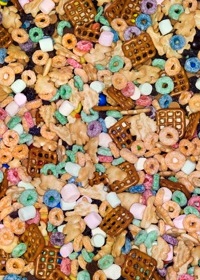 A new study out of the U.S. has found that cereals aimed at children tend to contain 85 per cent more sugar, 65 per cent less fibre and 60 per cent more sodium when compared to cereals marketed to adults. The new study, from Yale University’s Rudd Center for Food Policy and Obesity, is called Evaluating the Nutrition Quality and Marketing of Children’s Cereals and was released last month.

In the report a summary explains that ready-to-eat (RTE) cereals are the largest category of packaged food marketed directly to children.

The authors first evaluated the nutrient content of 277 RTE cereals offered by 13 companies in the U.S. and compared the quality of child, family and adult brands.

Here are more of their findings:

• Not one cereal that is marketed directly to children in the U.S. would be allowed to advertise to children on television in the U.K.

• Nutrition scores for new products introduced within the past two years indicate that the major cereal companies have not attempted to improve the nutrition quality of their product portfolio.

In a related study, reports USA Today, Yale researchers tracked 89 children, ages five to 12, who made their own breakfasts at summer camps. Kids were given either a box of sweetened cereal, such as Frosted Flakes, Froot Loops and Cocoa Pebbles, or a box of a low-sugar cereal such as Corn Flakes, Cheerios, Rice Krispies. They could take as much as they wanted of cereal, milk, sugar, orange juice, bananas and strawberries.

Here are the results:

• Kids given the low-sugar cereal ate about one serving or one cup. A serving varied from ¾ cup to 1 ¼ cup depending on the weight of the product.

• Those eating the high-sugar type ate two servings or about two cups.

• Children rated the taste of both types equally high.

• Kids eating the low-sugar brands added some sugar but still ate about half as much sugar and far fewer calories than the other kids and were more likely to put fruit on top.