Getting enough daily grain? Not according to survey

Toronto, Ont. – Only about 10 per cent of Canadians are consuming a healthy amount of whole grains each day, despite the fact that most consumers believe they actually eat too many servings of grain.

Canada’s Food Guide states that a healthy adult diet includes between six and eight servings of grains per day. At least half of that should be whole grains. But according to the new Grain Counter Survey by Harris/Decima conducted on behalf of Dempster’s and the Canada Bread Company, Ltd., the vast majority of Canadians are not meeting these recommendations.

When it comes to regional consumption, Ontarians eat the most grains (10 per cent), followed by consumers in Quebec and B.C. (nine per cent), Alberta (six per cent) and Manitoba and Saskatchewan (five per cent).

Misinformation about carbohydrate consumption may be one reason that consumers have cut back on grains, while a lack of knowledge about whole grains may be another. Good sources of grains include oatmeal, brown rice, whole grain pasta and whole grain breads. 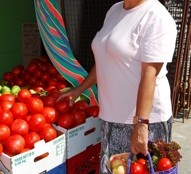