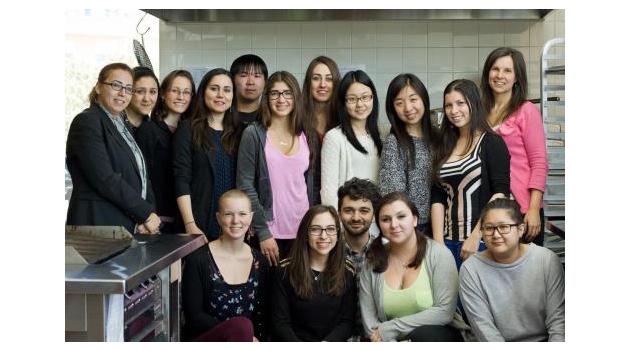 Montreal – A frozen dessert you can store at room temperature sounds like an oxymoron. It also sounds impossible.

But not to the team in the food science program at McGill University. This 16-person team created Frisson, a unique, sorbet-like dessert that can sit on the shelf until you get a craving.

Even the Institute of Food Technologists (IFT) Students’ Association selected Frisson as one of 16 finalists in its annual Food Product Development Competition sponsored by MARS.

In fact, this is the first time in more than 25 years that a Canadian team has been selected to participate in the finals.

The Canadian team is on its way to New Orleans this weekend for IFT 2014 where it will present Frisson to judges, including an all-important taste test.

“We are really proud of Frisson,” says Karine Paradis, team leader who graduated from McGill with a BSc(F.Sc)/BSc(Nutr.Sc) just last week.

“We’ve been working day and night on this project since September, as well as keeping up with our regular class loads, so to see it reach this point is really rewarding.”

The most innovative quality about Frisson is that it can be stored at room temperature in its original liquid form.

This means consumers won’t have to worry about containers melting and dripping if they’re out shopping on a hot summer’s day. It also means there will be fewer containers taking up space in consumers’ freezers.

When consumers crave a frozen treat, all they need to do is pop and replace Frisson’s lid to let a little air into the container, give it a little shake and put it into the freezer. A few hours later they can enjoy a frozen dessert. Right now the flavours include hibiscus-ginger and almond-pistachio.

In its original liquid form, Frisson remains stable as long as the seal is not broken. Once the package is opened, says the McGill website, nitrous oxide (commonly known as laughing gas) stored inside will activate. When the package is placed in the freezer, it will generate tiny bubbles in the mixture that, when frozen, helps create a light, creamy texture.

“We’ve used a complex combination of different ingredients in our product, so that when you freeze it, it will not just become a block of ice,” says Paradis. “It has the smooth texture that you want when you eat ice cream.”

One of the key components to Frisson is the combination of natural sugars – including agave syrup, corn syrup and arrowroot starch – that have been carefully selected for their various properties, individually and when working in conjunction with the other ingredients, says the McGill Reporter.

“It really is a complex combination of long chain and short chain sugars – and each has a different influence on the things like the rate of freezing, the rate of melting, how much water is retained by the product,” says Paradis.

And while consumers may worry about the chemical content of a product that can be stored safely on a shelf for months at a time, the truth is Frisson is healthier than most ice creams.

“We meet a lot of requirements of people who are on restricted diets,” says Paradis. “Frisson is pasteurized, vegan, dairy-free, gluten-free and it has zero cholesterol. It also has a high-fibre content which is very unusual for frozen desserts.”