It’s Impossible Food’s first foray beyond fake beef. The Impossible Burger, which went on sale in 2016, has been a player in the growing category of vegan meats. Like the burger, Impossible Food’s pork and sausage are made from soy but mimic the taste and texture of ground meat.

Impossible Pork will be rolled out to restaurants first. The company has not said when it will come to grocery stores. Impossible Foods only recently began selling its burgers in grocery stores, although they’re available at more than 17,000 restaurants in the U.S., Singapore, Hong Kong and Macau.

The pork products and the Impossible Burger are made in a similar way. Impossible Foods gets heme — the protein that gives meat its flavour and texture — from soy leghemoglobin, which is found in the roots of soy plants. To make heme in high volume, it inserts the DNA from soy into yeast and ferments it. That mixture is then combined with other ingredients, like coconut oil.

The company tweaked the ingredients to mimic pork’s springy texture and mild flavour. For the sausage it added spices.

Impossible Pork has 220 calories in a four-ounce serving.

Impossible Foods is also waiting for approval from European regulators to sell its products there. 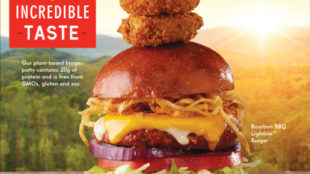 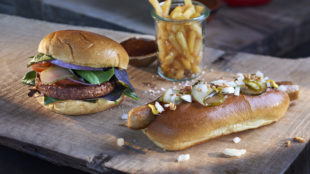