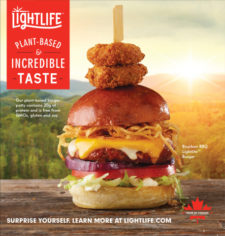 The burger will be making a debut during the Kelseys third Annual Burger Festival, from June 3 to July 14.

The new plant-based burger will be featured as part of Kelseys’ core menu within the “Burly Burgers” section starting June 3 at all 70 Kelseys locations across Ontario; St. John’s, N.L.; Moncton, N.B.; and Calgary, Alta. The plant-based burger patties contain 20g of protein and are free from GMOs, gluten and soy.

The Lightlife Burger will be launching in over 3,400 retail stores across Canada throughout May, including Metro, Loblaws, Sobeys, Longo’s and Federated Coop.