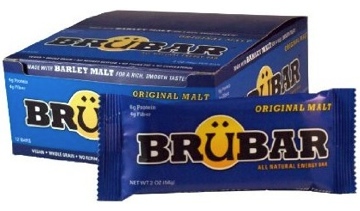 Brubar Energy Bar from Davis, Calif.-based BRU Company LLC is an all-natural bar made with simple ingredients like malt extract, rolled oats, dates, almonds and coconut. Currently available in two flavours – Original Malt and Cherry Almond – the bars are vegan, whole grain, and dairy-, soy- and wheat-free, and contain no refined sugars or trans fat. Each bar contains 220 calories, four grams of dietary fibre and either six grams (for the Original Malt) or five grams of protein, making them ideal for adding a boost of energy when you need it.

Male, 26, barista
Original Malt. “Correctly or incorrectly, Brubar is somehow supposed to taste like a beer even though it’s an all-natural energy bar. First the good news. It doesn’t suck. While it didn’t taste like a beer, it certainly had some of the same ingredients that are contained within a beer. It tasted like malt, but it wasn’t over-powering. It actually tasted pretty good and was quite filling, too. Not bad at all.”

Female, 30-something, teacher
Cherry Almond. “I didn’t know what to expect when I saw ‘made with barley malt.’ I have no idea what that would taste like. The bar has a yeasty scent about it and it’s actually appetizing. The bar is tasty too. I like the dense consistency of it and the subtle flavours. I’m not sure what I’m tasting – if it’s the cherry or almond flavour or the barley malt or a combination. I also like that it’s not too grainy. The nutrition facts are pretty decent. Though it does have 18 grams of sugar. The bar is very filling and I think it would be good on days when you’re particularly active, or just in need of something quick and satisfying.”

Female, 60-something, sales
Original Malt. “I don’t really like to eat snack bars, but if you’re someone who likes snack bars then you’ll probably like this. It was a bit seedy tasting as well. I found it good but very filling – I could never eat a whole bar.”

Male, 48, TV producer
Cherry Almond. “After my first bite, I suddenly remembered that while I like cherries and I like almonds, I hate the taste of them together. Blech. I really hate it. The Brubar Malt variety is much tastier. This? Well, if there is barley malt in it, I can’t taste it, and I’ve already said Blech.”

Female, 30-something, teacher
Original Malt. “This has a comforting, hearty flavour about it. The texture, too, is meaty and dense. It has a scent about it that I can’t put my finger on – I’m assuming that’s the barley malt that’s mentioned on the package. It’s slightly yeasty. I like that the bar is slow to digest (what it says on the package). Is that due to the barley malt? I’m curious as to why the company chose barley malt to base its energy bars on. I felt myself wishing there was more information on the package. I’ll have to check out the website. If these are sold individually, I’d buy them. I might do some more research on them first.”

Female, 40-something, IT specialist
Cherry Almond. “First of all, the packaging isn’t that appealing to me, it’s just sort of boring. Secondly, the bar looks awful – really awful. Which is why it came as such a surprise that I loved the taste! It actually reminded me of Christmas cake, with a cherry/coconut/date flavour that was really yummy. The ingredients are very simple, which I like, and the nutritional profile is good. It’s even vegan! I’m sold on this!”