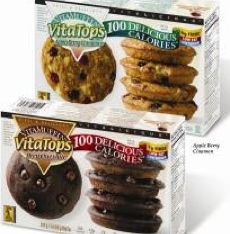 Food in Canada’s consumer review panel weighs in on select products in the Canadian marketplace. This time we’re tasting VitaMuffins and VitaTops from Vitalicious Inc.

VitaMuffins and VitaTops are 100-calorie muffins and muffin tops, individually wrapped and completely portable. Each snack contains five to seven grams of fibre, three to four grams of protein and eight grams of whole grains. They feature no preservatives or artificial ingredients, less sugar than regular muffins, and between zero and 1.5 g of unsaturated fat per 55-g serving. VitaTops are available in Deep Chocolate and Apple Berry Cinnamon, while VitaMuffins are available in Deep Chocolate, BlueBran, CranBran and MultiBran. Both products are available at major grocery and drug chains across Canada, with a four-pack retailing for between $4.49 and $5.99. www.vitalicious.ca

Female, 30-something
“The Apple Berry Cinnamon muffin top was tasty. However, I feel kind of swindled as it wasn’t a whole muffin! I know it’s a marketing/packaging ploy but I’m not in agreement with that Seinfeld episode…I’d like a whole muffin if I were to have a muffin. I would probably not buy this product just for this reason.”

Female, 30-something
“Vitatops Deep Chocolate Extra Chocolate. First off – I love the name of this muffin top and what it implies – lots of chocolate! I also love that it has only 1.5 g of fat. That’s a big relief. It smells wonderful – very chocolatey and very rich. You’d think it would taste heavy as a brick but it’s not at all; it’s light and fluffy and moist. It tastes almost like a piece of freshly baked cake or a light brownie. The best thing about this was the lack of guilt. It’s low in fat and it’s fortified with stuff that’s good for me like calcium, protein and iron. What a great excuse for a chocolate fix. I’d buy these.”

Male, mid-40s
“VitaMuffin’s CranBran is supposed to be a tasty alternative to cereals and bars, but I found the boast to be only half right – it certainly is an alternative. Presenting a certain cakey flavour, the CranBran did not exude a lot of positive taste – now that may have more to do with me having more of a sweet tooth, but the 11 g of sugar per muffin did not seem enough. While the outer packaging for the product shows approximately 11 cranberries on a muffin, I only had a total of three on top and inside – luck of the draw perhaps – but that just meant more cakey muffin. There was also a lingering after-taste, and not necessarily a good one. Colour-wise, the muffin was a lot darker than what was pictured on the box, and certainly didn’t look like a healthy fibre muffin. As an alternative to a cereal or a bar – the flavour did not convince me to switch. If I need to have a snack, this wasn’t an overwhelming experience. Would I buy it? No. Would I eat one again if offered to me? No. Not even if starvation was an issue. Available as four muffins per package, with each individually wrapped, I was at least quite hopeful about the chocolate flavour (Deep Chocolate). Cracking open the plastic wrapping, I could immediately smell the chocolate and was pleased to note a plethora of chocolate chips atop it. It also certainly tasted like chocolate, though it was also quite thick and cakey. It’s not what I expect when I eat a muffin, and I’m not altogether sure I like it. Still, there was no lingering after taste like the CranBran flavour had. As for colour, the outer packaging shows a nice medium chocolate-brown muffin that looks like it just came out of an oven. My sample was a dark, dark brown in colour – almost black – giving it the appearance of being either over-cooked or over-processed. Would I buy it? No. Would I eat one again if presented to me? Yes – but just to be polite.”

Female, 30-something
“The Apple Berry Cinnamon muffin top was a little dry, but had good flavour. Next time I will dip it in milk! As for the BlueBran muffin, you can tell it’s fat free. If I’m on a diet and can’t have a regular muffin then it’s a good choice, but otherwise I’ll stick to my full-of-fat muffins.”

Female, early 40s
“At first look the BlueBran doesn’t look like much, especially compared to the big fat-filled coffee shop muffins I’m used to. But it was delicious from the first bite – moist, tasty and filling. I love the fact that it has all that fibre, but without the huge amount of calories and fat. And despite my misgivings, it was just the right size too. Yum! I also tried the VitaTops in Deep Chocolate flavour. I love this product! So chocolatey without being overly sweet at all, and again, just the right size for a mid-morning snack. A plus was the fact that they contain fibre and protein. I’d definitely look for these at the store.”

Female, mid-20s
“I found this muffin (Apple Berry Cinnamon) to be a little bit too bland for my liking. Unfortunately could not even tell what kind of muffin it was. I would not recommend this muffin to a regular consumer, but maybe to those who are strictly organic consumers.”

Female, 30-something
“The BlueBran muffin was delicious; very moist and full of flavour. I didn’t feel like I was eating a cake, like I do with other muffins. I would definitely buy these. With the Apple Berry Cinnamon muffin top I felt like I was eating a stale cookie. The cinnamon was too strong. It felt like hard work to eat because of the stodgy consistency. Probably have my own muffin top after eating this!”