Relax and check out this meat

A new study suggests that the sight of cooked red meat may relax men and make them less aggressive.

A new study from Montreal’s McGill University suggests that the sight of cooked red meat may relax men and make them less aggressive.

According to Frank Kachanoff, a researcher in McGill’s psychology department, contrary to expected results, men in the study became less aggressive when shown images of cooked red meat. Kachanoff believes that the results could be traced back to early humans and the link between mealtime and family. “Our ancestors would be calm as they would be surrounded by friends and family at mealtime,” he says.

Kachanoff says the study involved a typical test for aggression. Eighty-two men – some of whom were vegetarians – where given the ability to inflict punishment through different volumes of sound on actors who made intentional mistakes while reading scripts. At the same time, the men were asked to sort photos, including images of cooked red meat, while they listened to the reader.

What researchers found was that the men where less likely to inflict punishment while looking at an image of cooked meat when the reader made a mistake.

Although Kachanoff says the study is important in terms of understanding how environmental factors influence aggressive behaviour, he says that the research should be replicated with other variables, including other images of meat rather than just cooked meat. 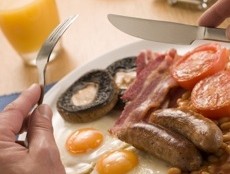