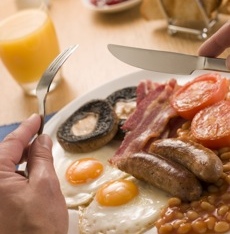 Despite recent fears linking red meat to certain types of cancer, a new study suggests that consuming processed and unprocessed red meat, fish, total poultry and skinless poultry does not affect the progress or recurrence of prostate cancer. However, the same study found that men who ate poultry with the skin on or who ate an average of five and a half eggs per day, doubled the risk of prostate cancer progression or recurrence.

The findings, published recently in the American Journal of Clinical Nutrition, were based on a study conducted by Harvard University of 1,294 men with prostate cancer. The study was conducted over two years, during which dietary intakes of meat and eggs were determined using a 127-item food frequency questionnaire.

As well as finding no link between red meat consumption and prostate cancer progression or recurrence, the study found that the saturated fat content of meat was not linked to prostate health, possibly as a result of the heterocyclic amines – mutagenic compounds found at much higher concentrations in well-cooked poultry than in other meats.

Commenting on the study to FoodNavigator, Nell Barrie, science information officer for Cancer Research UK, noted that further research is needed to study the link between prostate cancer progression and eating poultry with skin or eggs. “Importantly, this study doesn’t show that eating more poultry with skin or eggs increases the risk of getting prostate cancer – it only looked at men who already had the disease,” he added.

The researchers also noted some limitations to the study, including a short follow-up, a small number of prostate cancer deaths or metastases, and a lack of pre-diagnostic dietary data.