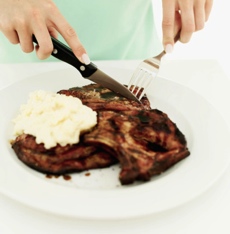 The Nurses’ Health Study, published in the most recent online edition of Circulation: Journal of the American Heart Association, tracked women between the ages of 30 and 55 from 1980 to 2006. It found that women who ate two servings per day of red meat had a 30-per-cent higher risk of developing coronary heart disease as compared to women who ate only half a serving per day.

Researchers say the study is significant because of its large sample size, its 26-year follow-up, and because it more precisely measured diet through the questionnaire the women were regularly given.

“Our study shows that making substitutes for red meat or minimizing the amount of red meat in the diet has important health benefits,” says Adam Bernstein, the study’s first author and a post-doctoral research fellow in the Department of Nutrition at the Harvard School of Public Health. “Although this study included only women, our overall knowledge of risk factors for heart disease suggests that the findings are likely to apply to men as well.”