Keeping kids healthy, and interested in meals, continues to be an ongoing challenge for parents and producers 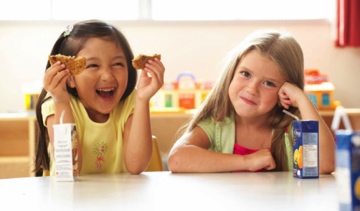 At one time, ensuring children ate healthily simply meant serving them a balanced diet of home-cooked meals from the four food groups – not too difficult when one parent was at home to do the grocery shopping and cook nutritious meals daily, but often impossible considering the busy schedules of most families today. Instead, parents are now looking to food manufacturers to provide them with meal options that are nutritious, tasty and convenient – and often portable – and that offer good value for the money and in many cases, something the whole family can enjoy. Luckily, producers are answering the call with an increasing number of different options, including products fortified with natural ingredients, specialty products such as gluten-free foods, as well as healthier versions of traditional kid-friendly favourites.

For Toronto, Ont.-based Sweetpea Baby Food, offering a line of frozen baby food that was healthy and organic and which contained no preservatives or additives, was a key concern. “It was really important for us to have a very clean ingredient label,” says Sweetpea co-owner Eryn Green. “After all, you’re giving this food to your baby, someone who doesn’t have a strong immune system yet. We wanted ingredients parents can understand and can relate to, and that they can feel good about giving to their kids.”

Sweetpea took the same position when it launched a line of biscuits two years ago that double as a teething biscuit for babies, and a healthy snack for toddlers and young children. “In focus groups with parents we kept hearing about how hard it is to find a cookie that’s also healthy. What we heard most was about what they didn’t want in a product,” says Green. The resulting biscuits, which are shaped like a flower with a hole in the middle for little fingers to hold, contain no salt, eggs, milk and flour, and have a low sugar content, making them suitable for both kids and adults with gluten, allergen or diabetic concerns.

Offering great tasting, healthy foods that the entire family could enjoy was also the goal of Toronto, Ont.-based Life Choices Natural Foods. The company began in 2002 selling organic pizzas and entrées, and has since grown to include a number of family friendly meals that offer great taste, nutrition and convenience. “We try to formulate products that don’t take long to prepare and that give parents more time,” says owner and president Matthew von Teichman. The company’s largest line is its breaded products, including chicken and fish nuggets and burgers. “These fit the convenience mould, but we try to ‘healthify’ them – they’re a healthier alternative for the kinds of foods kids like to eat.”

To boost the nutritional value of its offerings, Life Choices adds flax meal and seed for the omega-3 to many of its products, and will soon be adding inulin for fibre. Other products are made with multi-grain and whole grains, its macaroni and cheese is organic, while hot dogs are nitrate-free and meatballs contain flax and vegetables. “For us balancing health and great taste is key,” says von Teichman. “The whole exercise of creating healthier products is moot if kids won’t eat them.” The company is currently launching a line of chicken hot dogs, as well as natural beef and chicken sausages, and a “bare” grilled chicken nugget without breading.

Rae Craig, Marketing manager, Breakfast and Flatbreads, for Toronto-based Canada Bread, agrees that creating healthy products that everybody in the family enjoys is a must. “Health is such a big focus for us, and we want to make it as easy as possible for moms to help their families get their six to eight grain servings each day,” says Craig. Dempster’s new Thin Bagels are one product that is aimed at kids, but made for sharing with the entire family. “The idea was to take a traditional favourite and offer it in a portion-controlled and kid-friendly size,” says Craig. At about half the size and less than half the calories of Dempster’s regular bagels, Thin Bagels are available in three varieties: white with whole grains, multigrain, and cinnamon raisin.

To get its message out to parents, von Teichman says Life Choices’ in-store demos and focus groups are geared to parents rather than kids, so that the health benefits of the foods stand out first and foremost.

Richmond, B.C.-based Nature’s Path took a different route when it launched the EnviroKidz line of children’s products in 1992. Rather than speaking just to parents with healthy messaging, the line features educational information on different endangered animals, accompanied by colourful graphics and ideas for young children and teens to become more environmentally involved. Featuring five different cereals and seven bars and cookies, the line is allergen- and gluten-free, has no high fructose corn syrup, and sugar content is close to or below double-digit amounts. Like much of Nature’s Path’s products the line features ancient whole grains, is certified organic and is verified as non-GMO.

Like Life Choices and Canada Bread, Nature’s Path emphasizes the value of foods that are suitable for the entire family. “We have over 60 recipes on our website that use the cereals for different dayparts to help moms use that cereal,” says Maria Emmer-Aanes, director of Marketing and Communications for Nature’s Path. “We also offer larger Eco Pacs of cereal at a reduced cost. People are still looking for a deal too.”

While maintaining a fine balance between great taste and great nutrition is an ongoing challenge when developing foods kids enjoy, there are other issues that are unique to the sector. “Texture and colour are a huge issue for kids’ products,” says von Teichman. “For example, when you remove the nitrates hot dogs lose their red colour, so it is a problem for formulation – kids won’t eat something that doesn’t look familiar to them.”

Texture is also an issue for breaded products, says Craig. “We didn’t want to stray too far from what’s familiar to kids, so, for instance, our white bagels with whole grains and fibre still have the texture of white bread. They offer ‘hidden goodness’ so that kids will eat them.”

Emmer-Aanes believes that while demand for organic kids’ foods will continue to grow, interest in non-GMO foods is also heating up. “What we see more of now is conscious buying,” says Emmer-Aanes. “People are now making more of a connection between what they decide to spend their money on, and what they feed their family.” Gluten-free foods, particularly snacks, are also appearing more frequently, as are foods with a “less is more” concept – less sodium, sugar and saturated fats.

Suppliers such as Dow AgroSciences are responding to this need with products such as its new omega-9 oils, which allow manufacturers to produce foods with less unhealthy fats. “Fats are an important part of our diet. But when you’re a 30-lb. child the consequences of high doses of bad fat are greater,” says Dave Dzisiak, commercial leader, Grains and Oils for Dow AgriSciences. “Since it’s difficult to change what people eat, the question becomes can we instead try to make those foods healthier?”

Dow’s omega-9 oils were developed by the company’s Plant Breeding Group in Saskatoon, Sask., and are functional, cost effective and offer great health benefits. The company has already worked with manufacturers such as Weaver Popcorn, which launched a popcorn snack featuring the omega-9 oil last fall, allowing it to cut all trans fats, remove the majority of saturated fats and cut down on calories.

Sprouted grains is another concept Von Teichman says, “appears to resonate with moms,” prompting the company to consider it for future product launches. Moms are also talking about products that cross food and beverage categories. Emmer-Aanes cites Mamma Chia, an organic sprouted chia beverage that packs a powerful health punch, as an example of a drink/snack becoming popular with moms due to its nutritional and satiety benefits. “But,” she concedes, “sometimes there’s a reluctance by kids to try foods no matter what you do.”

Related
Opportunities lie in getting kids to eat fruits and vegetables
Healthy Foods Lead 2009 Grand Prix Food Awards
Getting enough daily grain? Not according to survey