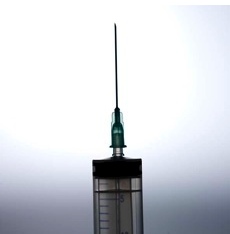 The university’s website reports that the veterinary microbiology student’s work, which is soon to be published, is based on the idea that humans can be protected from harmful bacteria by vaccinating cattle that are the source of the bacteria.

Cutting bacteria off at the source

Asper’s work, says the website, builds on groundbreaking research by his supervisor, Andrew Potter, director of the Vaccine and Infectious Disease Organization-International Vaccine Centre, which led to the first cattle vaccine against E. coli O157 – the leading cause of what is known as “hamburger disease.” The vaccine prevents the bacteria from attaching to the animal’s intestines and from colonizing, cutting the disease off at the source.

While E. coli O157 is the most prevalent type of E. coli in North America, it’s just one of hundreds of E. coli bacteria around the world that cause disease by producing a toxin called Shiga toxin.

These Shiga toxin-producing E. coli, or STEC for short, cause disease in humans if meat becomes contaminated during slaughter or if feces mix with groundwater, polluting drinking or swimming water or food supplies.

But the STEC bacteria that cause human illness generally do not make animals sick so healthy cattle often have STEC bacteria living in their intestines.

What Asper has been able to do is create a vaccine prototype to protect cattle against a number of non-O157 STEC bacteria that are responsible for human outbreaks of disease around the world.

With funding from the Canadian Institutes of Health Research, the Natural Sciences and Engineering Research Council, and Bioniche, a commercial developer of Potter’s vaccine, Asper has created the second generation vaccine prototype and participated in initial testing on mice and cattle.

Though E. coli 0157 is the most prevalent STEC bacteria in North America, others are more dominant around the world. In Europe, O26 is the most common and in South America it’s O111.

“One place where this could make a huge difference is Argentina,” explains Asper. “They have 10 times the cases of renal failure that we do in Canada.”

Also due to improved detection methods, cases of non-O157 E. coli infection are on the rise, increasing the importance of having the second generation vaccine.

The vaccine will now be put through extensive testing that could take three to five years.