Editorial: A Word of Warning

The six-month, $3-million investigation spoke with federal organizations, food safety and health experts and professionals, the food industry, consumer advocacy groups, and the Canadian public. All players involved in the tragedy, including Maple Leaf, the Canadian Food Inspection Agency, the Public Health Agency of Canada, Health Canada and government leadership in general, were criticized for their actions – or non-actions – and found lacking in some respect. In fact, at a press conference announcing the release of the report, Weatherill described the listeriosis outbreak as “preventable,” saying: “What we found is that last summer our food safety system did not work as perfectly as it needed to. The investigation has made clear that much more could have been done to prevent this from happening in the first place and more to that point, much more must be done to make sure it doesn’t happen again.”

Although Weatherill noted that there have been improvements to our food safety system since the incident, the report also made 57 recommendations, including several specifically for meat processors, and called on more progress to ensure greater protection for Canadians. For more information on the methods and scope of the investigation, and to download the official report visit http://www.listeriosis-listeriose.investigation-enquete.gc.ca

So far the response to the report has been positive, and many in the industry see it as a good first step towards concrete food safety improvement in Canada, for all partners in that process. One thing that stood out was Weatherill’s comments on communication and public health information, both during and before the outbreak. According to the report: “From everything we heard, if there is a single issue that garnered near unanimous agreement, it is that the public was confused and did not understand what they should be doing following news of the food recalls. This is not surprising, considering the complexity of the issues involved in the outbreak and the many organizations providing varying levels of information at different points in the event.” In addition, the report went on to say: “There is lack of clarity on who is responsible to communicate with vulnerable populations on food safety issues.” 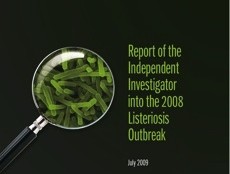